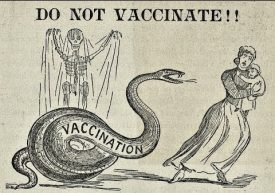 I ran across a cartoon graphic by Ben Garrison and just had to share it with you.  This just about sums up what is happening right now in America, “its a Great Country”.  Could someone please tell me exactly how we find ourselves in this mess?  Am I misinformed ?  I thought this was a country governed by the People and for the People?  How did this happen? Debt Slaves living in a Police State, eating at the trough of GMO Food with Forced Vaccinations at the Rear !    Above image: A cartoon from a December 1894 anti-vaccination publication Courtesy of The Historical Medical Library of The College of Physicians of Philadelphia.

The Antivaccination Movement is as old as the first vaccines dating back to the 1790’s.  Compulsory vaccination for smallpox in England in the 1800’s was met by a vocal anti-vaccination movement.  (5-6) A quote from Jul 15, 2015 The Atlantic regarding comments of anti-vaccine activist, Alfred Lord Wallace in 1898.(5)

“Every day the vaccination laws remain in force parents are being punished, infants are being killed,” wrote Alfred Russel Wallace, a prominent scientist and natural selection theorist, in a vitriolic monograph against mandatory vaccination in 1898. He accused doctors and politicians of pushing for vaccination based on personal interest without being sure that the vaccinations were safe. Wallace cited statistics from a report by the Registrar-General of deaths from vaccination from 1881 to 1895, showing that an average of 52 individuals a year died from cowpox or other complications after vaccination. Wallace pointed to the deaths to assert that vaccination was useless and caused unnecessary deaths.”(5)

Conclusion: There has been a raging battle between the pro-vaccine and anti-vaccine groups about mandatory vaccination for over 120 years.  Welcome back to the 19th century.

Which is Greater threat Measles or Measles Vaccine?

Measles and Somalis in Minnesota

Financial Kickbacks to Pediatricians is Illegal and Harms Children

HPV Vaccine the Greatest Scandal of Our Time

5) The Victorian Anti-Vaccination Movement, Today’s anti-vaccination movement is not the first. Riots, pamphlets, and an outcry in 19th-century England set the stage for contemporary misinformation campaigns.
Elizabeth Earl Jul 15, 2015 The Atlantic