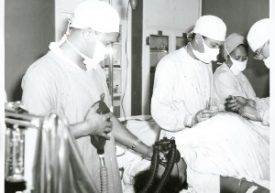 Is This The End of Medicine in America ?

Is This The End of Medicine in America ?

It appears we have come to the end of Medicine in America. When people lose trust in the hospitals, the doctors, and the government health agencies, this means the whole enterprise is over.

Advocating a program of “therapeutic nihilism” , meaning we have no early home treatment for Covid-19, when the public is now aware of highly successful and effective early home treatment protocols is another way to destroy trust in the medical system.  These therapies have been used with success in  many other countries such as India, Mexico, Japan, and central Africa.

Instead, we have suppression and censorship of any information about early treatment modalities. The Mass Media  and Big Tech in collusion with Government agencies has suppressed the truth.  This does not create trust in our medical system.

Out of one million doctors in the US, we have 500 heroic doctors across the country treating COVID19 at home using early treatment protocols.  Instead of being hailed as heroes, they have been been hunted, harassed and persecuted. This does not encourage trust in our medical system.

The forced vaccination of children who have almost zero risk from the disease with a product known to cause myocarditis has been described as a form of child sacrifice. This has eliminated any remaining trust in the vaccination program.

Who runs a vaccination program without any vaccine safety board or oversight committee  ? This is an egregious error which has destroyed trust.

How does one destroy faith and confidence in vaccines? Simple, promote a failed vaccine to people who know the truth.   The mRNA vaccines have failed to prevent the disease.  Adverse events and deaths from the vaccine have sky rocketed in the VAERS reporting system.  The spike protein is pathogenic.

Pfizer refusing to release clinical trial documents for 75 years ? How does this encourage trust?

Using an ineffective drug with high mortality rate such as Remdesivir does not encourage trust.

Our Medical System has become facilitator of government tyranny. This does not encourage trust.

American doctors have proven to be cowards, cravens, zombies, and fools facilitating Dr. Fauci’s evil campaign — in concert with the rapacious pharmaceutical industry and a government in thrall to sinister forces that seek to destroy the country. The doctors have disgraced and dishonored themselves. The doctors have probably undermined their own vocations, as well as the entire armature of US health care, which they have allowed to become history’s worst racketeering operation. End Quote (1)

Folks, this is not a pretty picture. Here is what a nurse has to say about what she is seeing in the hospital: