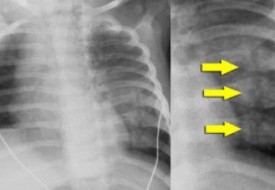 Over the past 30 years thousands of parents have been falsely accused, found guilty and imprisoned for “shaken baby syndrome”, a diagnosis  of child abuse based on Xrays showing fractures, intracerebral and retinal bleeding.  Left image shows  old rib fractures (yellow arrow) on chest xray of infant.  Is this diagnostic of child abuse ? What other diagnostic possibilities should be considered?  Courtesy of Radiology Assistant. “In 1946, John Caffey described multiple fractures in the long bones of infants suffering from chronic subdural hematoma. None of the parents reported any knowledge of falls or physical injury, but Caffey suspected child abuse to explain the injuries. Following this retrospective, radiological study by Caffey, the diagnosis of shaken baby syndrome (including retinal petechiae, multiple fractures of the long bones, and subdural hematomas) evolved and has resulted in many men and women being convicted of child abuse, all without any meaningful consideration of a differential diagnosis”.(6) (Clemetson 2006)

Illinois radiologist David Ayoub MD and pediatrician Edward Yazbak MD have studied the issue and found that many of these cases are not child abuse.  Rather, many of these unfortunate babies have underlying metabolic bone disease associated with prematurity, chronic pneumonia, maternal and fetal Vitamin D3 deficiency, Vitamin C deficiency, Vitamin K deficiency, all aggravated by aluminum adjuvants in multiple vaccinations given early in the first few months of life.  The underlying metabolic bone disease predisposes these babies to fracture.  Coagulation disorders, and hypoxia predispose to intracerebral bleeding which may occur in-utero or associated with traumatic birth.

The left image is an Xray showing  a mid femur fracture.  Is this a traumatic fracture caused by wife beating,  “Battered Wife Syndrome”? Or Metabolic Bone disease?:  If you guessed metabolic bone disease, you would be correct.   This middle aged female had been treated many years with a bisphosphonate drug which created a metabolic bone disease, with a spontaneous mid-femur fracture occurring with NO trauma.

Needless to say, child abuse does exist.  Some children are unwanted, and there are no doubt many cases of infanticide by parents who consider killing their child more convenient than caring for a demanding infant.

However, to incarcerate innocent parents and caregivers based on a false medical diagnosis of “Shaken Baby Syndrome”  is equally unjust.  The diagnosis of child abuse vs. metabolic bone disease requires appropriate testing for metabolic bone disease, and applying thought and consideration to the case.  Hopefully pediatric radiologists and pediatricians can be educated quickly enough to bring a halt to the unjust imprisonment of innocent parents. Its bad enough to grieve over a lost infant.  To grieve from inside a prison cell wrongly convicted of killing your own child is a bit too much.  Wrongful Imprisonment image courtesy of David Feldman Web Site.

After many long years of imprisonment, parents wrongly convicted of “shaken baby” are now being released, and convictions overturned,  thanks to Drs.  David Ayoub and Edward Yazbak who have devoted themselves to helping these innocent people.

“Tissue Scurvy” is an autoimmune disorder in which there is an abundance of Vitamin C in the body(unlike the Seafarer Scurvy of yesteryear) but it is inhibited from entering the tissue cells to perform its functions of maintaining the integrity of the blood vessels and skeletal tissue and partaking in several enzymatic reactions because of the lack of insulin which is essential for the transfer of Vitamin C into the cell. The result is the development of fractures, hemorrhages and other lesions of Scurvy. Here it is shown a child alleged to have been murdered by being shaken to death was found to have hyperglycemia, implying insulin deficiency and concomitant Tissue Scurvy. It is concluded that the diagnosis Shaken Baby Syndrome, and all examples of unexplained fractures, bruises, retinal and subdural hemorrhages with encephalopathy – the so-called “TRIAD” – are in fact an autoimmune disorder following antigenic stimulation in a genetically susceptible child. Vaccines administered within 4 weeks of the onset of symptoms are the most common cause. The Shaken Baby Syndrome is a fabricated diagnosis and has no place in medical jurisprudence.

The Journal of American Physicians and Surgeons, Vol. 11, No. 1, spring 2006 issue.  Also available at http://www.jpands.org/