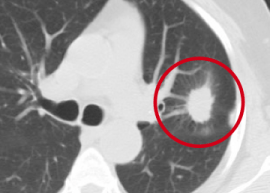 During my days working as a radiologist, one of my jobs was early detection of lung cancer on chest Xrays and CAT scans. Left Image shows CAT scan of chest shows typical lung cancer (red circle) courtesy of Duke Lung Cancer Screening.

Although we occasionally found a mass or nodule on a chest Xray, the prognosis for lung cancer was poor even with the best of treatment.  At first, we had high hopes that annual chest X-Rays would reduce mortality from lung cancer.  However, clinical trials were disappointing.  Not only was there no reduction in mortality in the screened population, many lung cancers could be found in retrospect on the previous chest X-ray which had been “missed ” six months before.  This was an embarrassment best avoided.  The large study which finally answered the question was the PLCO in JAMA.  Again, this showed no reduction in mortality with annual chest X-Rays and Lung Cancer Screening seemed doomed.

Since the plain old fashioned Chest Xray is a failure for lung cancer screening, perhaps upgrading to the latest technology, with the CAT Scanner,  we might have better luck.  The CAT scan is a more sensitive and accurate imaging device compared to the plain chest Xray.

The latest clinical study was favorable.  The National Lung Screening Trial,  enrolling heavy smokers, showed a 20% reduction in mortality in the screened population.(8)  However there was a high price to pay in terms of a 96% false positive rate.  These false positive cases may then undergo invasive procedures such as percutaneous lung biopsy which can cause a pneumothorax (air in the chest cavity and collapsed lung).  A pneumothorax requires a hospital admission and chest tube placement.(8-10)

A false positive means the CAT scan detects a suspicious nodule which later is discovered to be “nothing”, just a benign nodule or scar tissue.  This is quite common in heavy smokers with COPD (chronic obstructive lung disease) and many years of chronic cough and inflammation.  Needless to say, such a high false positive rate is alarming, and can lead to harming the patient with unnecessary invasive procedures. Left Image shows pneumothorax on the right courtesy of Aukland hospital.

What if we had a test that could reduce the 96% false positive rate? The Circulating Tumor Cell (CTC) test finds the tumor cells circulating in the patient’s blood stream.  The presence of the circulating tumor cells predicts which patient harbors an occult malignancy. (1-3)

The CTC test uses an ingenious technique which coats the tumor cells with beads, microscopic iron nano-particles, and then uses a strong magnet to separate the tumor cells from the remaining blood components.  Once separated, the tumor cell can be examined under the microscope, and even grown in cell culture.(4-5)  Left image circulating tumor cell (upper left) covered with attached beads courtesy of Angewandte Chemie

Using the CTC Test at the Pasteur Hospital, Nice, France

A research group from the Pasteur Hospital in Nice, France reported in Oct 2014  their experience using CTC testing on COPD patients.  They were able to find lung cancers before clinically apparent on CAT scans.(1-3) Left Image Pasteur Hospital Nice France courtesy of Ingerhop.

In this study, Circulating Tumor Cell testing (CTC) was done on 168 COPD patients.  Even though clinically negative for cancer,  five (3%) of the 168 COPD patients had a positive CTC test indicating they harbored an undetected early malignancy.  Later, over the next few years, annual CAT scans revealed lung cancer in all five patients who then underwent surgical resection with good outcome.  The authors concluded,”Monitoring “sentinel” CTC-positive COPD patients may allow early diagnosis of lung cancer.”(3)

Other Cancer Markers:  By combing cancer markers such as hCG (human chorionic gonadotropin), PHI (phosphohexose isomerase) and CEA (carcino-embryonic antigen), Dr Emil Schandl has reported excellent results for early detection of lung and other cancers.(11-12).  Perhaps incorporating these additional markers along with CTC testing prior to Lung CAT screening might prove even more useful.

The CTC test is available at Quest.  It is called Cell Search.

Cancer as a Metabolic Disease

How Does Cannabis Kill Cancer Cells?

1) http://www.isetbyrarecells.com/circulating-tumor-cells-narrow-lung-cancer-screening-greatest-risk/
Could Circulating Tumor Cells Narrow Lung Cancer Screening to Those at Greatest Risk ?  On Nov. 10,2014,  the U.S. Centers for Medicare & Medicaid Services (CMS) announced that it will fund low-dose helical computerized tomography (CT) screening for those at high risk for lung cancer, specifically those aged 55-74 who are defined at “heavy smokers” (1 pack per day for the last 30 years). All told, 9 million Americans will be covered for annual screening.

The decision is based on the 2010 National Lung Screening Trial, which looked at 53,000 smokers in the U.S. aged 55-74. These patients were screened annually with low-dose helical CT and X-rays.  When compared to patients who were screened using X-ray alone, the cohort screened with CT had overall reduction in mortality of 20%.

The decision is not without critics. Many worry about the radiation exposure from annual CT scans. Another risk comes from false positives. CT scanning is not perfect, often providing images that are nebulous. The 2010 National Lung Screen Trial revealed that invasive action taken as a result of a positive CT scan—such as biopsy or surgery—caused a significant number of deaths.  Cost is another factor. The new Medicare benefit is expected to cost $9 billion in the first five years.

These patients were diagnosed and treated while in the very earliest stages of lung cancer: Stage 1A. And all five remain in remission 16 months after the surgery. Spiral CT screening can save many lives. But in the INSERM study, researchers were able to first identify those high risk patients at the greatest risk of lung cancer by testing for CTC using ISET.

Chronic obstructive pulmonary disease (COPD) is a risk factor for lung cancer. Migration of circulating tumor cells (CTCs) into the blood stream is an early event that occurs during carcinogenesis. We aimed to examine the presence of CTCs in complement to CT-scan in COPD patients without clinically detectable lung cancer as a first step to identify a new marker for early lung cancer diagnosis. The presence of CTCs was examined by an ISET filtration-enrichment technique, for 245 subjects without cancer, including 168 (68.6%) COPD patients, and 77 subjects without COPD (31.4%), including 42 control smokers and 35 non-smoking healthy individuals. CTCs were identified by cytomorphological analysis and characterized by studying their expression of epithelial and mesenchymal markers. COPD patients were monitored annually by low-dose spiral CT.  CTCs were detected in 3% of COPD patients (5 out of 168 patients). The annual surveillance of the CTC-positive COPD patients by CT-scan screening detected lung nodules 1 to 4 years after CTC detection, leading to prompt surgical resection and histopathological diagnosis of early-stage lung cancer. Follow-up of the 5 patients by CT-scan and ISET 12 month after surgery showed no tumor recurrence. CTCs detected in COPD patients had a heterogeneous expression of epithelial and mesenchymal markers, which was similar to the corresponding lung tumor phenotype. No CTCs were detected in control smoking and non-smoking healthy individuals. CTCs can be detected in patients with COPD without clinically detectable lung cancer. Monitoring “sentinel” CTC-positive COPD patients may allow early diagnosis of lung cancer.

7) On Medicare and Assessing the Value of Lung Cancer Screening MAY 8, 2015 New York Times

The aggressive and heterogeneous nature of lung cancer has thwarted efforts to reduce mortality from this cancer through the use of screening. The advent of low-dose helical computed tomography (CT) altered the landscape of lung-cancer screening, with studies indicating that low-dose CT detects many tumors at early stages. The National Lung Screening Trial (NLST) was conducted to determine whether screening with low-dose CT could reduce mortality from lung cancer.
METHODS:

The purpose of this study was to evaluate the clinical significance of different serum tumor markers in patients with breast cancer who developed recurrent disease. Determined were tissue polypeptide antigen (TPA), carcinoembryonic antigens (CEA), and phosphohexose isomerase (PHI). Serum samples of 411 breast cancer patients with either locoregional or metastatic recurrence were analyzed. Positive rates of all three markers depended on the clinical stage of the disease, with highest rates of elevated titers in advanced disease. In comparison, CEA and TPA are more sensitive markers than PHI. According to the site of recurrence, CEA exhibited the highest rate of elevated titers in patients with bone metastases and PHI in patients with visceral metastases. Using PHI in combination with CEA, sensitivity (ie, at least one marker is elevated) was increased by 6-20% compared to the results obtained with single marker analysis. However, for easier interpretation of the tumor marker results in clinical practice, it may be helpful to employ a product value of CEA and PHI.

Phosphohexose isomerase (PHI) and carcinoembryonic antigen (CEA) were measured at the time of diagnosis in 300 patients with lung cancer. Serum levels were high in 75.7% and 53.0% of patients respectively. PHI levels were higher in large cell and small cell carcinomas (p less than 0.001). CEA levels were higher in adenocarcinomas (p less than 0.001). Metastatic carcinomas showed higher levels on PHI and CEA than localized cases. Survival was significantly longer in patients with normal PHI (p less than 0.001) and normal CEA (p less than 0.005) than in cases with elevated markers. The prognostic significance of PHI persisted in the different pathological types and stages, whereas CEA only had prognostic impact in non-small cell cases. Serial PHI determinations were useful for follow-up in 82.4% of cases with initial abnormal values and in 55.4% of cases with a normal value. Serial CEA was useful in 41% of cases with initially high value but in less than 15% of those with baseline normal. We conclude that PHI has prognostic significance independently of pathology and stage, whereas CEA was a prognostic indicator only in non-small cell cases; serial PHI determinations were useful more often than CEA for follow-up.