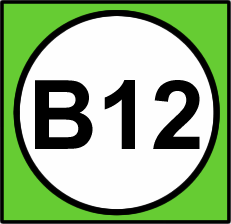 B12 Deficiency and Neuro-Psychiatric Disorders by Jeffrey Dach MD

B12 Deficiency and Neuro-Psychiatric Disorders

A case was presented at the Medical University of South Carolina.  The patient was a 23 year old female with paranoid psychosis treated unsuccessfully with anti-psychotic medications and shock therapy.  The treatments only made her worse.  Eventually, further testing revealed the patient had a severe vitamin B12 deficiency, and was finally given Vitamin B12 injections resulting in a dramatic improvement. (1)

A second case involves a  52-year-old female who had a complete remission of psychiatric symptoms without recurrence over four years with vitamin B12 as the only treatment.(2)  There are many others. (3-11)

link to this article.
This article is part two of a series.  For part One click here.

A Common Mistake by Psychiatry

These two cases highlight the common mistake made by my dear colleagues in psychiatry who fail to look for organic causes of mental illness.  Vitamin B12 deficency is one of the more common of the organic causes detected by  a serum B12 level and urinary methyl malonate. How many neuro-psychiatric patients actually have undiagnosed B12 deficiency ?  Your guess is as good as mine. We will probably never know.

Misdiagnosis in the Psych Ward –  Thyroid, Gluten and MTHFR

Perhaps this blindness to B12 deficiency is a symptom of a larger problem with our psychiatric colleagues who tend to ignore organic causes of mental illness, while mindlessly rushing into treatments with psycho-active drugs, shock therapy and the dreaded frontal lobotomy.

B12 Deficiency and Dementia in the Elderly

As we reach old age, the incidence of dementia with cognitive dysfunction goes up.  Similarly, B12 deficiency goes up, a manifestation of malabsorption of the vitamin which worsens as we age.  It is important not to miss the diagnosis of B12 deficiency, since this is a reversible cause of dementia in the elderly.

Above Left Image B12 chemical structure.  Notice CN (Cyanide molecule) at center, this is cyano-cobalamin.  We use the methylcobalamin version, the preferred form of the vitamin.  Courtesy Wikimedia Commons.

Another common misdiagnosis in the Psych Ward is the thyroid disorder, specifically Hashimoto’s thyroiditis which can mimic a manic-depressive disorder.  See my previous article on this.

Another common misdiagnosis is the MTHFR mutation which is gene responsible for the conversion of folate to its active form methyl-folate.  This mutation may affect ability to synthesize neurotransmitters in the brain and is treatable with a vitamin called methyl-folate.  Instead, my dear psychiatric colleagues blindly rush into treatment with various dangerous and addictive psychoactive medications such as amphetamines, benzodiazepines, atypical antipsychotics and combinations of SSRI antidepressants in or out of the hospital psych ward.  Some may even get shock therapy. You might notice that none of these medications contain methy-folate which is the single item the patient really needs.  See my previous article on this.

Low Testosterone as Underlying Cause of Depression

In men, low testosterone has been known to cause depression and treatment with testosterone is very effective.  Rather than test testosterone levels and treat this underlying cause, the psychiatry clinic will dispense various antidepressants and psychoactive drugs, none of which contain testosterone and are largely ineffective in this scenario. (links to medical literature on this topic).

Disturbance of the HPA hypo-thalamic-pituitary axis is common from many prescription and street drugs which have psycho active properties.  Examples are MDMA, Ecstasy-type street drugs, Narcotics, Benzodiazepines,  Alcohol , etc.  HPA disturbance may continue many years after the causative drug has been discontinued.  These patients are commonly given psychiatric drugs which do not address the underlying problem. Rather than treat with psychoactive drugs, these patients should need supportive treatment to allow the  endocrine system and HPA  to return to normal functioning.

See my previous article on this endocrine system disruption from narcotics.

Also see this article on restoring HPA function in patients presenting with low testosterone induced by street drug use.

One of the failings of modern medicine is the way in which our psychiatric colleagues ignore the underlying organic causes of mental illness.   This results in the misdiagnosis and mistreatment of many unfortunate souls leaving behind a trail of human misery.(16-17)

There are many more organic causes of mental disorders as we have barely scratched the surface.   All this makes it obvious that Psychiatry needs a “makeover”.   The rank and file psychiatric practitioner needs to go back to square one, get a re-education in the underlying organic causes of mental illness, and remake the way they practice.   Blindly dispensing psychoactive drugs, shock therapy and other ineffective measures creates the tragedy known as modern psychiatric treatment.

One such psychiatrist who has made this transition is Kelly Brogan.  Read her article on Vitamin B12 Deficiency and Brain Health.

Lexapro for Hot Flashes a Joke?

Getting Off SSRI Antidepressants

This article is part two of a series.  For part one, click here.

A Case is presented of a 23-year-old woman with progressive onset of paranoid psychosis and catatonia, who was ultimately found to have both vitamin B12 deficiency and a family history of bipolar disorder. The patient was initially diagnosed with schizophrenia and treated with the antipsychotic medication ziprasidone. Her condition rapidly worsened to a state consistent with either neuroleptic malignant syndrome or malignant catatonia. Work-up then revealed vitamin B12 deficiency and a family history of bipolar disorder. Her symptoms improved rapidly but partially with benzodiazepines and electroconvulsive therapy, and completely with addition of valproic acid, vitamin B12 replacement, and re-introduction of antipsychotic medication in the form of olanzapine. The authors discuss the differential diagnosis of catatonia as reflecting a high likelihood of underlying mood disorder; the evaluation and management of malignant catatonia and malignant neuroleptic syndrome; and the role of vitamin B12 deficiency in precipitating psychotic symptoms. The case also illustrates the problems of diagnosing and managing a multifactorial disorder with psychiatric, general medical, and perhaps iatrogenic components.

2) http://www.ncbi.nlm.nih.gov/pubmed/12823174
Acta Psychiatr Scand. 2003 Aug;108(2):156-9.
Catatonia and other psychiatric symptoms with vitamin B12 deficiency.
Berry N1, Sagar R, Tripathi BM.
To study unusual psychiatric manifestation of vitamin B12 deficiency and related issues.
METHOD:A case study of 52-year-old female and review of relevant literature.
RESULTS:Complete remission of psychiatric symptoms without recurrence for the next 4 years with vitamin B12 as the only specific therapy instituted.
CONCLUSION:Importance of B12 estimation and replacement in patients with varied psychiatric manifestations.

7) http://www.nytimes.com/2011/11/29/health/vitamin-b12-deficiency-can-cause-symptoms-that-mimic-aging.html?_r=0
It Could Be Old Age, or It Could Be Low B12  By JANE E. BRODY
Published: November 28, 2011
Others at risk of developing a B12 deficiency include heavy drinkers (alcohol diminishes B12 absorption), those who have had stomach surgery for weight loss or ulcers, and people who take aminosalicylic acid (for inflammatory bowel disease or tuberculosis) or the diabetes drug metformin (sold as Glucophage and other brands). Patients who take the anticonvulsants phenytoin, phenobarbital or primidone are also at risk.

Vitamin B12 (cobalamin) deficiency is a common cause of macrocytic anemia and has been implicated in a spectrum of neuropsychiatric disorders. The role of B12 deficiency in hyperhomocysteinemia and the promotion of atherosclerosis is only now being explored. Diagnosis of vitamin B12 deficiency is typically based on measurement of serum vitamin B12 levels; however, about 50 percent of patients with subclinical disease have normal B12 levels. A more sensitive method of screening for vitamin B12 deficiency is measurement of serum methylmalonic acid and homocysteine levels, which are increased early in vitamin B12 deficiency. Use of the Schilling test for detection of pernicious anemia has been supplanted for the most part by serologic testing for parietal cell and intrinsic factor antibodies. Contrary to prevailing medical practice, studies show that supplementation with oral vitamin B12 is a safe and effective treatment for the B12 deficiency state. Even when intrinsic factor is not present to aid in the absorption of vitamin B12 (pernicious anemia) or in other diseases that affect the usual absorption sites in the terminal ileum, oral therapy remains effective.

13) http://www.ncbi.nlm.nih.gov/pubmed/15580869
Seishin Shinkeigaku Zasshi. 2004;106(9):1110-6.
[A case of Addison’s disease presented with depression as a first symptom].
[Article in Japanese] Iwata M1, Hazama GI, Shirayama Y, Ueta T, Yoshioka S, Kawahara R.
This report describes a 52-year-old male patient with idiopathic Addison’s disease presenting depression as a first symptom. His psychomotor inhibition, depressive mood, sleep disturbances, general fatigue, muscular pain, and arthralgia were considered to be due to intense work in a stressful environment. Neither his physician nor his orthopedist found any physical disease. Therefore, he was diagnosed with endogenous depression by a psychiatric clinic, and antidepressants were prescribed. Antidepressants were not sufficient for improving his symptoms, and he was admitted to our hospital. Endocrine blood examination revealed primary adrenocortical insufficiency. Treatment with glucocorticoid induced rapid improvement in both the psychiatric and physical symptoms. It is well known that psychiatric symptoms occur in the progressive stage of Addison’s disease. At present, however, the occurrence of psychiatric symptoms is very rare, mainly because of a decrease in the incidence of this disease or an increase in mild cases. In addition, Addison’s disease presenting with psychiatric features in the early stage has the tendency to be overlooked and misdiagnosed. Thus, we suggest the necessity of blood work for ACTH and cortisol in the field of psychiatry.

14) http://www.ncbi.nlm.nih.gov/pubmed/24725972
Gen Hosp Psychiatry. 2014 Mar 5. pii: S0163-8343(14)00062-0. doi: 10.1016/j.genhosppsych.2014.02.012. [Epub ahead of print] Psychiatric symptoms in a patient with isolated adrenocorticotropin deficiency: case report and literature review.
Morigaki Y1, Iga JI2, Kameoka N2, Sumitani S2, Ohmori T2.
We report a 59-year-old man with isolated adrenocorticotropin (ACTH) deficiency. The patient presented with sudden onset of delusions and hallucinations at the age of 54, which resolved gradually without treatment. Subsequently, the patient manifested stereotypy, wandering, hypobulia, and autistic symptoms, and was treated with antipsychotics for 1 year without any improvement. He suffered from neuroleptic malignant syndrome-like symptoms at the age of 59. A thorough endocrine assessment revealed isolated ACTH deficiency. After hydrocortisone supplementation, the physical and psychiatric symptoms improved dramatically. Clinicians should consider this rare disease when diagnosing patients with refractory psychiatric symptoms and unique physical symptoms of isolated ACTH deficiency.

16) http://mentalillnesspolicy.org/coping/misdiagnosis.html
HOW TO TELL IF SOMEONE DIAGNOSED WITH A MENTAL ILLNESS, HAS ANOTHER MEDICAL DISORDER (THAT MAY HAVE LED TO A MISDIAGNOSIS)  by  DR. RON DIAMOND

Regarding the nutritional supplements which may be mentioned:

This aricle may be copied or reproduced on the internet provided a link and credit given. (c) 2014 All Rights Reserved Jeffrey Dach MD

Images are courtesy of wikimedia commons in public domain.