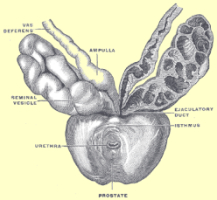 Since the invention of the PSA test for prostate cancer, it is quite common to detect elevated PSA in the male population.  Mainstream medical practice for these patients with elevated PSA’s (prostate specific antigen) is to refer them to a urologist for evaluation and possible treatment.  Standard Urological practice is the trans rectal ultrasound guided biopsy of the prostate.  If prostate cancer is found on the biopsy, then the cancer is characterized according to aggressiveness and invasiveness (Gleason Score). 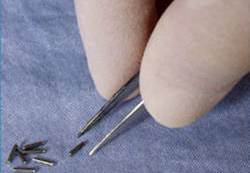 For the aggressive or dangerous prostate cancers that do not fit into the watchful waiting category, treatment options include surgery with radical prostatectomy (surgical removal).  The major drawback of surgery is the possibility of post-op urinary and sexual  complications such as urinary incontinence and sexual dysfunction, which might dissuade one from chosing the surgical option.  An alternative to the surgical treatment option is radiation therapy which is administered either with radioactive seeds implanted into the prostate (left  image)  or by external beam radiation of some type.   Above left image: Radiation Seeds Courtesy of Wikimedia.

For the patients who choose to have radiation therapy, current practice before starting the course of radiation treatments is to “shrink the prostate” with hormonal therapy which suppresses testosterone to low levels.  In the old days of medicine, testosterone blockade was done with surgical castration, and I actually assisted in one of these during my training 30 years ago.  Removing testicles has fallen out of favor, as drugs such a Lupron are available that do the job easily.   Above left image: chemical structure of testosterone courtesy of wikimedia.

A discovery such as this, that a treatment that carries a 20 per cent increase in mortality means the treatment is discredited and should be discarded, and should no longer be the “standard of care”.  Instead it should be considered “substandard care”. However, old habits in medicine have a way of lingering on, so it may take a few more years for this to change.

Benefits of Testosterone Part One

BOSTON — September 24, 2008 — Neoadjuvant hormonal therapy given prior to brachytherapy is associated with increased all-cause mortality in elderly men with localised prostate cancer compared with brachytherapy alone, investigators reported here at the American Society for Therapeutic Radiology and Oncology (ASTRO) 50th Annual Meeting.     In a presentation on September 23, lead investigator Amy M. Dosoretz, MD, Harvard Radiation Oncology Program, Boston, Massachusetts, reported results of a retrospective analysis including 1,709 men at least 70 years old with localised prostate cancer treated between 1991 and 2005.    The study evaluated 786 men who were treated with a short course of neoadjuvant hormone therapy for a median duration of 3.5 months before brachytherapy and 916 men with brachytherapy alone. None of the men received supplemental external beam radiation therapy.    After a median follow-up of 5 years and after adjusting for known prostate cancer prognostic factors and age, the researchers found that neoadjuvant hormone therapy was associated with a hazard ratio of 1.2 for all-cause mortality compared with brachytherapy alone (95% conﬁdence interval, 1.0-1.4; P = .04), Dr. Dosoretz reported.

link to this article:  http://wp.me/P3gFbV-pJ