Calcium Score Determines Who to Treat With Statin Drug

Decision to Start Statin Based on Calcium Score

Have you ever wondered why statin drugs seem to be effective for secondary prevention, (people with known heart disease), and not effective for primary prevention (people  without heart disease)?  A new study by Joshua Mitchell explains why.  Current practice dictates that Cardiologists prescribe statin drugs based on a cholesterol over 200.  This has been changed by the Joshua Mitchell study from the Walter Reed Registry which supports a new decision tree. Instead of using the serum cholesterol level, the decision to give a statin drug should be based on the Calcium Score obtained from CAT scan cardiac imaging.

The chart below shows that for a Calcium score of 0 to 100, there is no benefit for taking a statin drug.  For a score above 100, however, the chart shows considerable reduction in MACE (major adverse cardiac event) for the statin users.  Notice cholesterol level is not mentioned in this study.

The Joshua Mitchell study does something else.  By ignoring serum cholesterol level in the decision to prescribe a statin drug, the study supports the idea that statin drug benefits are entirely due to Pleotropic effects (anti-inflammatory and antimicrobial), not due to cholesterol lowering.  This is further supported by the fact that other non-statin drugs fail to have any impact on cardiovascular events.  The latest was the CETP Inhibitor, Evacetrapib which lowers LDL-Cholesterol, yet failed to prevent cardovascular events compared to placebo in clinical trials, and was abandoned.(11)(Lincoff,2017)  This is also true for all other non-statin cholesterol lowering drugs.  They are all failures. This strongly supports the idea that all of the benefits of statin drugs are due to pleotropic effects, none from cholesterol lowering, which, in actuality, represents a liablity which impairs health.

As we all know, statin drugs were initially developed as cholesterol lowering agents. However, only later it was observed they had other anti-inflammatory and anti-microbial properties. For example, studies done on sepsis and pneumonia patients showed that those on statins enjoyed improved survival. (7) (Hennessy,2016)  Two separate studies show patients on statins undergoing cardiac bypass surgery had reduction in peri-operative mortality by 50-70%. (5,6) (Curtis 2017) (Barakat 2016)

Dr Emma Hennessy summarizes the research, (in vitro, cell culture and in vivo),  suggesting statins could be repurposed as an anti-microbial drugs.(7) There is even efficacy against biofilm. (7)

The Power of Zero

Dr Joshua Mitchell concluded:  “the presence and severity of CAC (Coronary Artery Calcium) identified patients most likely to benefit from statins for the primary prevention of cardiovascular diseases.” 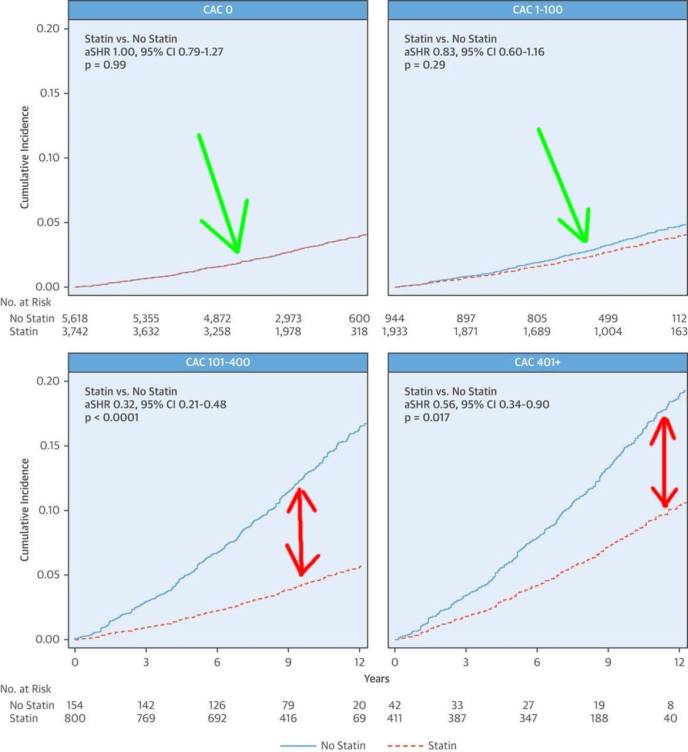 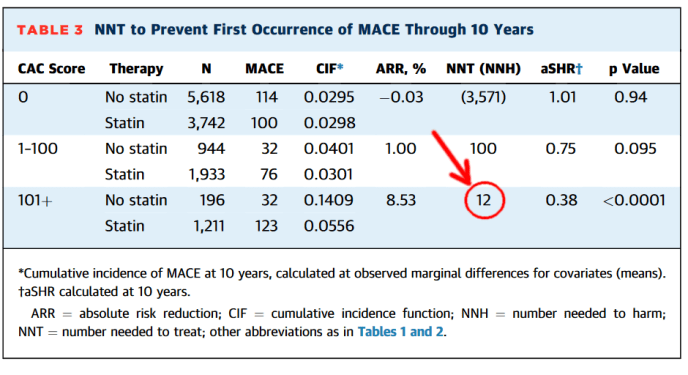 Above chart : Table 3 courtesy of Joshua Mitchell (2)  Notice NNT (Number Needed to Treat) for calcium score greater than 100 drops to 12 (red arrow and red circle).  Note:This is over ten years of treatment, however.

Above chart: Table 1 from abstract shows for Calcium score over 400, NNT drops to 4.5 for 10 years on statin drug. (red arrow and red circle) Courtesy of Joshua Mitchell (4)

Granted, using calcium score to determine who to treat with a statin drug allows refinement of the NNT (Number Needed to Treat) down to 4.5 over 10 years for those with calcium score over 400.  However what are the adverse side effects? This is an important question.  How many of these long term statin users end up in wheel chairs unable to walk because of statin induced myopathy.  How many suffer from debilitating neuropathy, cognitive dysfunction and dementia?  Are we trading away quality of life to buy a reduction in cardiac events?  Many practitioners would argue adverse side effects are so severe, it would be preferable to avoid statins and reduce calcium score with alternative methods.

Another disturbing finding is that statin drugs actually accelerate progression of calcium score according to Dr. Dykun in the 2016 Heinz Nixdorf Recall study. (15)  Based on the 2004 Paolo Raggi data, annual progression of calcium score higher than 15% is a bad omen, predictive for heart attack within a few years in about 8-9% of the 500 patients on statin drugs Dr Raggi followed for 6 years..  However, for the other 450 (91%) patients on statin drugs, the calcium score progression was less than 15%, and these patients enjoyed a benign prognosis.  Remarkably in the non-progressor group, the higher baseline calcium score people, above 1000, enjoyed the same benign prognosis as the lower score people   (0-100).  (See chart below) 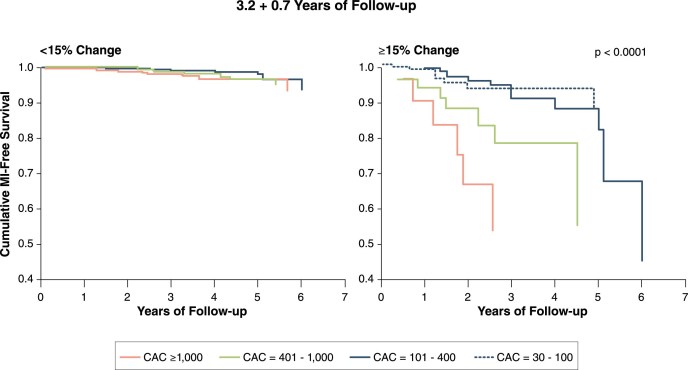 Above image courtesy of Paolo Raggi 2004.(16,17) All patients on statin drugs. Left Chart are Non-Progressors, less than 15% annual increase in calcium score showing good prognosis, all lines converge at top of chart.   Right Chart: These are the Progressors with Greater than 15% annual progression of calcium score.  Chart shows graded separation according to baseline calcium scores with more rapid decline to MI for higher scores.(17)

For Non-Progressors (left chart) their calcification is stable with  less than 15% annual increase.  They enjoy a benign prognosis.

How to Explain Statin Drug Failures?

What feature or bio-marker defines which group of patients we will fail into, Progressor or Non-Progressor in the 2004 Peolo Raggi study?     How do we explain the statin drug failures, the Progressors who had MI’s in spite of the statin drug?

Obviously, cholesterol level is a useless biomarker, since it was the same for both groups. Unfortunately, the authors of the study did not comment or propose an explanation.  I would propose this explanation:the defining factor is the severity of endotoxemia.

Severity of Endotoxemia, Not Cholesterol Level

I would propose the following: In the non-progressors, these people have lower levels of endotoxemia which can be successfully opposed by the pleotropic effects of the statin drug.  For the Progressors, they have more severe, unrelenting endotoxemia which overwhelms the weak effects of the statin drug and leads rapidly to MI (myocardial infarction) within 6 years.  We await further research to confirm this hypothesis.

My previous article on Aged Garlic shows superiority over statin drugs for reduction in calcium score without adverse effects of statin drugs. One might argue that aged garlic together with other combined modalities such as vitamin C, Tocotrienols, Vitamin K2, Vitamin D3, Magnesium, Essential Phospholipid, Fibrinolytic Enzymes, Berberine, addressing leaky gut, eliminate wheat and other foods that cause leaky gut…etc, might prove even more effective for reducing calcium score than statin drugs, without the adverse side effects.

Periodontal disease and other occult other infections are frequent culprits seeding endotoxemia and causing atherosclerosis.(12-14)  See my previous article on the LPS Theory of Heart Disease. A visit to your local biologic dentist for a good set of dental xrays can help find the problem. 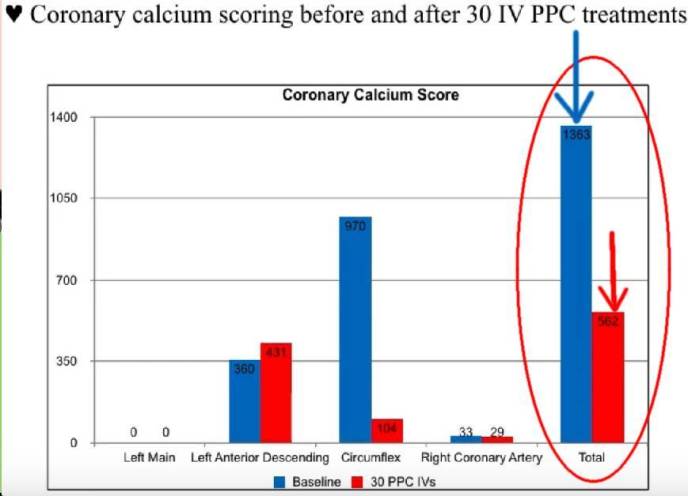 The beneficial pleotropic effects of statin drugs can be more effectively replicated, without adverse effects of statins, by using combined modalities of diet, lifestyle modifications and supplements used by integrative practitioners.  Here is one such list of items.  There are others of course.

One of the remarkable paradigm shifts in cardiology is the shift away from the cholesterol panel.  The calcium score has emerged as a better decision making tool to decide which patients should be treated with statins, and which patients should not.  The old method of prescribing a statin drug based on elevated cholesterol level is no longer valid, and has been replaced by Calcium Score.

Another message supported by the Joshua Mitchell study is the statin drug benefit for the higher calcium score patient is entirely due to pleotropic effects (anti-inflammatory and anti-microbial effects), not due to cholesterol lowering.

No doubt this new methodology will improve the NNT (Number Needed to treat) for the statin drug.  However, one must consider the adverse effects of long term statin use, and ask if the trade off is worth the reduction in quality of life? We await further research to answer this question.

All Past Heart Disease Articles by Jeffrey Dach MD

3) Raggi, Paolo. “Coronary calcium is all we need for risk assessment, yet we do not use it often enough.” Atherosclerosis (2019).

The most fatal flaw of CAC detection for risk assessment, in the eye of physicians opposed to its use, is that there are no randomized clinical trials to demonstrate that by treating only patients with CAC, as opposed to those with an (no ?) indication for treatment, the risk of events is reduced. However, the circumstantial evidence that this is true is overwhelming, and it is simply logical to predict that antibiotics will work best in patients with lobar pneumonia than in those at “risk of developing pneumonia”.

Conclusion: In a large-scale cohort without baseline ASCVD, CAC presence and severity significantly risk stratified patients who are most and least likely to benefit from statin therapy during long-term follow-up.