Italy is no stranger to Fascism having suffered under the dictatorship of Benito Mussolini who aligned Italy with Nazi Germany and deported 8,000 Jews to concentration camps. Ever since, Italy has experienced the back and forth, ebb and flow of fascism rearing its ugly head.(2)(12-14)

Just this week, in a striking rebuke to Medical Fascism, Italy’s new government overturned the Mandatory Vaccination Laws.  Parents will now exercise their right to decide on timing and scheduling of vaccinations, or may choose to opt out entirely.(1)

Massive Rallies Not Covered By Media

Last year 2017, saw massive protest rallies and marches in Italy protesting mandatory vaccination laws.  There was very little coverage from the US media.  You can watch a video from the marches here and here.(16)

What is Medical Fascism ?

Government coercion which forces a citizen to undergo a medical procedure without their consent is the hallmark of medical fascism. (3-11) For example medical experimentation on concentration camp victims by Nazi doctors is medical fascism.(15)

Forcing people to undergo surgical procedure, sterilization, based on state law is a form of medical fascism.  The state of Indiana passed a Eugenics inspired sterilization law in 1907.  The law was struck down in 1921 by the Indiana Supreme Court after 2500 people had been involuntarily sterilized by the state. Sterilization of institutionalized patients continued to the mid-1970’s in 33 states. In all, about  60,000 Americans were involuntarily sterilized.   Similarly forcing people or their children to undergo vaccination is medical fascism. 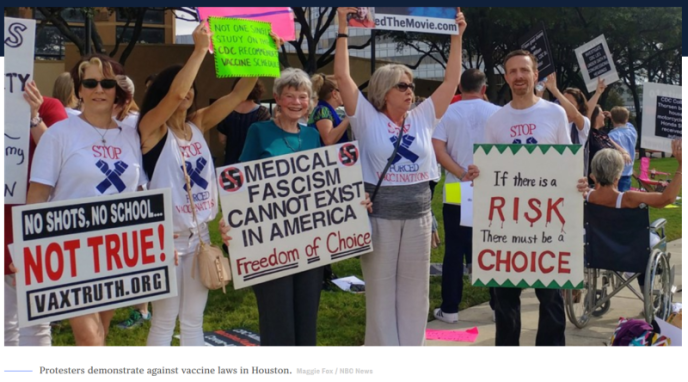 Conclusion: We must be vigilant and protect our freedom.  We must stand with Italy against medical fascism of any kind, including mandatory vaccination and forced sterilization.

Link to this article:

Which is More Dangerous Measles of Measles Vaccine ?

League leader and Interior Minister Matteo Salvini said in June that the 10 obligatory vaccinations, which include measles, tetanus and polio, “are useless and in many cases dangerous, if not harmful,” according to ANSA news agency.
“I confirm the commitment to allow all children to go to school,” he added. “The priority is that they don’t get expelled from the classes.”
Health Minister Giulia Grillo, a Five Star member, said the government wants to “spur school inclusion and simplify rules for parents.”

2) https://www.bbc.com/news/world-europe-21260072
Italy’s mixed feelings about Fascism By David Willey BBC News, Rome
Former Prime Minister Silvio Berlusconi, who is actively campaigning for re-election in next month’s general election, set off a chorus of outrage this week.
He suggested, while attending a Holocaust Memorial Day ceremony in Milan, that the Duce had not been as entirely bad as the history books made out. In fact he had done some “good things”.
Mr Berlusconi said that the racial laws, which led to 8,000 Italian Jews being herded off to death camps, were Mussolini’s “worst mistake”.
Mr Berlusconi was even rebuked by Italy’s head of state, President Giorgio Napolitano, who said that democratic Italy knew that Fascism was an “aberration”.
The canny media magnate was immediately accused of courting extreme right-wing support for his proposed new People of Freedom party coalition in the run-up to the election on 24-25 February.

5) http://freedom-articles.toolsforfreedom.com/mandatory-vaccinations-afoot-medical-fascism/
Mandatory Vaccinations Afoot: Medical Fascism Approaching Fast by Makia Freeman
as California has just achieved the horrific distinction of becoming the first state in the US to introduce compulsory vaccinations for both children and adults (bills SB277 and SB792 respectively). This goes to show that the NWO (New World Order) agenda of collectivism and medical fascism is fast approaching.

11) http://www.anh-usa.org/when-does-crony-medicine-become-fascist-medicine/
When Does Crony Medicine Become Fascist Medicine?
By anh-usa on September 20, 2016 Stop Poisoning Ourselves
It’s when the attorney general of California tries to stop medical exemptions for vaccines.

14) https://www.britannica.com/place/Italy/The-Fascist-era
The Fascist era The rise of Mussolini

June 2017 saw the biggest public demonstrations against forced vaccination held in Europe since the Victorian era,1 as tens of thousands of Italians of all ages marched for vaccine freedom of choice in Rome, Florence, Milan, Bologna, Turin, Cagliani and other cities.2 They marched in opposition to a May 19 decree endorsed by the government’s Health Minister and President mandating that school children receive multiple doses of 12 vaccines or be prohibited from attending school with fines of up to $7500 euro (about $9,700) assessed to non-compliant parents.3 4 5

Link to this article:

Copyright (c) 2018 Jeffrey Dach MD All Rights Reserved. This article may be reproduced on the internet without permission, provided there is a link to this page and proper credit is given.