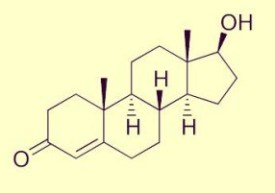 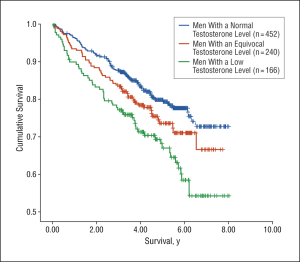 In the second study published in 2008 tracked nearly 800 men, 50 to 91 years old, living in California. Their testosterone level was measured at the beginning of the study, and their health was then tracked over the next 20 years. Low testosterone symptoms reported by these men included decreased libido, erectile dysfunction, fatigue, loss of strength, decrease in bone density and decreased muscle mass. Also, these men tended to be overweight or obese, and at higher risk for cardiovascular disease and diabetes. Men with the lowest testosterone, below 241 total serum level, were 40% more likely to die.(2)

A third study published by Dr Malkin in Heart 2010 showed that men with known  coronary artery disease commonly had low testosterone levels which was associated with double the mortality rate compared with men with normal levels. (6)  Dr Malkin says: “Excess mortality was noted in the androgen-deficient group compared with normal (41 (21%) vs 88 (12%)”

Does Testosterone Cause Prostate Cancer? by Jeffrey Dach MD

Low testosterone may lead to a greater risk of death, according to a study presented Tuesday at the annual meeting of the Endocrine Society in Toronto.
Men with low testosterone had a 33 percent greater death risk over their next 18 years of life compared with men who had higher testosterone, according to the study conducted by Dr. Elizabeth Barrett-Connor and colleagues at the University of California at San Diego. “It’s very exciting and potentially a groundbreaking study,” said Barrett-Connor. “But it needs to be confirmed.” The study tracked nearly 800 men, 50 to 91 years old, living in California. Their testosterone level was measured at the beginning of the study, and their health was then tracked over the next 20 years.

4) http://www.medicalnewstoday.com/articles/153822.php
Testosterone Replacement For Men With Low Testosterone Improves Liver Function, Metabolic Syndrome. Testosterone deficiency, which becomes more common with age, is linked not only to decreased libido but also to a number of medical problems. These include the metabolic syndrome a cluster of metabolic risk factors that increase the chances of developing heart disease, stroke and type 2 diabetes.

5) http://www.news-medical.net/news/2008/03/04/35897.aspx
Low testosterone levels linked to depression in older men March 2008
Older men with lower free testosterone levels in their blood appear to have higher prevalence of depression, according to a report in the March issue of Archives of General Psychiatry.

Conclusions In patients with coronary disease testosterone deficiency is common and impacts significantly negatively on survival. Prospective trials of testosterone replacement are needed to assess the effect of treatment on survival.

Copyright (c) 2009- 2017 Jeffrey Dach MD All Rights Reserved. This article may be reproduced on the internet without permission, provided there is a link to this page and proper credit is given.