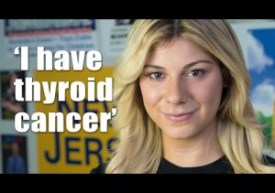 The American Idol finalist Alum Jax Cole announced that she underwent thyroid surgery in April after discovering a “lump in her neck”.  She is now receiving radiation treatments, presumably radioactive iodine (I-131), after the finding of thyroid cancer at surgery.(1-3)

An Epidemic of Overdiagnosis of Thyroid Cancer  In Women

According to Dr Gilbert Welch in 2014 Otolaryngology, there is an epidemic of overdiagnosis of thyroid cancer in young women.(4)

In other words, mortality from thyroid cancer did not increase, even though  the incidence tripled.  If this was real cancer, one would expect increase in mortality numbers.  There was none. 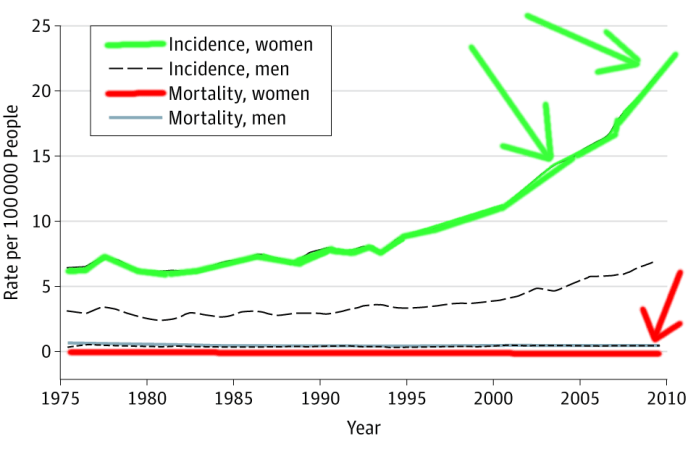 “The increased detection of thyroid cancer results in surgery and radioactive thyroid treatment that may be of limited benefit.”

“The autopsy prevalence rate of occult thyroid cancer in the Finnish population is 35.6%, suggesting that thyroid cancer is both common and clinically insignificant for the vast majority of individuals”

“It is likely that the majority of diagnosed thyroid cancer patients will not benefit from surgical and/or adjuvant interventions. “

Pathologists:  Many Thyroid Cancers Should be Reclassified

Dr Nikiforov writes in JAMA Oncology 2016 that many thyroid cancers are really not cancer and should be reclassified.(6)  An example is the encapsulated follicular variant of papillary thyroid carcinoma.  These cases are treated as having conventional thyroid cancer, yet they are not really cancer,  Dr Nikiforov says this type of pathology does not require radioactive iodine after surgery.

In 2016, Dr Lester Thompson reviews 94 cases of thyroid cancer with the pathology diagnosis of “Encapsulated follicular papillary thyroid carcinoma”. (17)  Because of the indolent nature, they recommended changing the pathology classification to “Noninvasive Follicular Thyroid Neoplasm”  Dr Lester  Thompson went on to say: These are “exceedingly indolent tumors, best managed conservatively by lobectomy or thyroidectomy alone, without radioablative iodine or suppression therapy.”(17)

Thyroid Cancer: What are the Drivers of Overdiagnosis:

3) Conflicted panels such as the American Thyroid Association, and the Endocrine Society write guidelines that expand disease definitions and encourage overdiagnosis.

6) Cultural beliefs that more is better; faith in early detection unmodified by its risks. (12)  Paraphrased from Ray Moynihan. “Preventing overdiagnosis how to stop harming the healthy .” Bmj (2012).

Dr. Adriane Fugh-Berman states very clearly,  “there is a tradition in U.S. medicine of excessive medical and surgical interventions on women”.(14)

Over-Diagnosis of “Hysteria” in Women.

Perhaps one of the early examples of medical iatrogenesis in  women occurred in the 1800’s in Paris with the over-diagnosis of “Hysteria” by Dr Charcot   Dr. Martin Charcot of the Paris hospital La Salpetriere diagnosed, ten “Hysterical” women each day,  The number of women diagnosed as “Hysteria” increased 17-fold from  from 1% in 1841 to 17% in 1883.(13,14)

A more recent historical example of medical iatrogenesis in women is the 1938 story of DES (Diethylstilbestrol) the first synthetic hormone replacement drug.  This carcinogenic monster hormone was approved by the FDA and given to millions of women from 1940 until it was banned in 1975 because it was shown carcinogenic.  The first report of cervical cancer in the daughters of DES treated women was published in April 1971 in the New England Journal of Medicine.(15)

Our next example of medical iatrogenesis in women is Premarin, a horse estrogen isolated from the urine of pregnant horses.   Available since FDA approval in 1942, Premarin has caused an estimated 15,000 cases of endometrial cancer, representing the largest epidemic of serious iatrogenic disease ever reported.(15)    One might think this would be the end of any drug.   However Premarin was promptly rehabilitated with the addition of another synthetic hormone, a progestin, to prevent endometrial cancer.  Thus, in 1995, Prempro was born, a synthetic hormone pill containing both Premarin (the horse estrogen) and Provera (the progestin).  Again, this was FDA approved,  thought safe and handed out freely to millions of women.

SSRI Antidepressants Shown to be No More Effective Than Placebo

The next example medial iatrogeneiss in women is SSRI antidepressant drugs that were shown to have little benefit for patients with mild to moderate depression.  The benefits of SSRI drugs are equivalent to placebo pills.(15).  Adverse side effects include sexual dysfunction, movement disorders, increased suicidality, mania and violence and withdrawal effects.  In spite of this, the discredited SSRI drugs are still being dispensed freely to millions of women.

Mistreatment of Women by the Medical System – Excessive Hysterectomies

The National Women’s Health Network has written extensively on the overuse of hysterectomies.  Ernst Bartsich, M.D., a  surgeon at Cornell in New York. says ” Of the 617,000 hysterectomies performed annually, “from 76 to 85 percent” may be unnecessary. “(CNN)  Thus representing another example of mistreatment of women by the medical system.(15)

A disfiguring operation which provided no benefit compared to lesser procedures such as lumpectomy.

Which was abandoned when studies showed it offered no benefit.(Welch BMJ 2002)

Was abandoned after studies found no benefit compared to conservative treatment.

For under 50 age women offers more harm than benefit.

Drs Welch, Udelsman, Nikiforov and Moynihan have come forward to alert the public to the “Epidemic of Overdiagnosis of Thyroid Cancer”,  a form of medical iatrogenesis in young women.   Since Alum Jax Cole’s pathology report was not made public, we don’t know if her particular case was  overdiagnosis.

Update August 2016:  Autopsy studies do not mirror the increasing incidence of thyroid cancer, again indicating a problem with overdiagnosis (23):

“the observed increasing incidence (of thyroid cancer) is not mirrored by prevalence within autopsy studies and, therefore, is unlikely to reflect a true population-level increase in tumorigenesis. This strongly suggests that the current increasing incidence of iDTC most likely reflects diagnostic detection increasing over time. ” (23) by  L. Furuya-Kanamori,  Prevalence of Differentiated Thyroid Cancer in Autopsy Studies Over Six Decades: A Meta-Analysis. Journal of Clinical Oncology, 2016.

She went to a local urgent-care center, where doctors discovered 18 tumors on her thyroid — 12 of which tested positive for cancer — and diagnosed her with Hashimoto’s disease, a type of hypothyroidism.

Cole revealed she was diagnosed with cancer in April and has already undergone surgery to remove her thyroid and nearby lymph nodes.

Despite hearing the diagnosis, Cole tried to make light of the situation. She said, “The first thing I did when I found out about the cancer was crack a joke.

3)  ‘American Idol’ finalist Jax says she has thyroid cancer
Last Updated: Tuesday, August 09, 2016
MyCentralJersey.com reports (http://mycj.co/2aIoTjd ) Jax was diagnosed in the spring and underwent surgery to remove the thyroid and several lymph nodes. The 20-year-old singer and songwriter from East Brunswick became chronically ill with respiratory and exhaustion issues during her journey on “American Idol.”

The diagnosis came a week after a sold-out show in April. She says she felt something wasn’t right when she was recording on the West Coast. She went to an urgent care center, which found that she had 18 tumors on her thyroid.  She says she’s been undergoing radiation treatment in New York since her thyroid was removed.  Despite the diagnosis, Jax says she’s going to participate in the New York City Marathon on Nov. 6.

4)  JAMA Otolaryngol Head Neck Surg. 2014 Feb 20. doi: 10.1001/jamaoto.2014.1. [Epub ahead of print]Current Thyroid Cancer Trends in the United States.
Davies L1, Welch HG2. IMPORTANCE We have previously reported on a doubling of thyroid cancer incidence-largely due to the detection of small papillary cancers. Because they are commonly found in people who have died of other causes, and because thyroid cancer mortality had been stable, we argued that the increased incidence represented overdiagnosis. OBJECTIVE To determine whether thyroid cancer incidence has stabilized. DESIGN Analysis of secular trends in patients diagnosed with thyroid cancer, 1975 to 2009, using the Surveillance, Epidemiology, and End Results (SEER) program and thyroid cancer mortality from the National Vital Statistics System. SETTING Nine SEER areas (SEER 9): Atlanta, Georgia; Connecticut; Detroit, Michigan; Hawaii; Iowa; New Mexico; San Francisco-Oakland, California; Seattle-Puget Sound, Washington; and Utah. PARTICIPANTS Men and women older than 18 years diagnosed as having a thyroid cancer between 1975 and 2009 who lived in the SEER 9 areas. INTERVENTIONS None. MAIN OUTCOMES AND MEASURES Thyroid cancer incidence, histologic type, tumor size, and patient mortality. RESULTS Since 1975, the incidence of thyroid cancer has now nearly tripled, from 4.9 to 14.3 per 100 000 individuals (absolute increase, 9.4 per 100 000; relative rate [RR], 2.9; 95% CI, 2.7-3.1). Virtually the entire increase was attributable to papillary thyroid cancer: from 3.4 to 12.5 per 100 000 (absolute increase, 9.1 per 100 000; RR, 3.7; 95% CI, 3.4-4.0). The absolute increase in thyroid cancer in women (from 6.5 to 21.4 = 14.9 per 100 000 women) was almost 4 times greater than that of men (from 3.1 to 6.9 = 3.8 per 100 000 men). The mortality rate from thyroid cancer was stable between 1975 and 2009 (approximately 0.5 deaths per 100 000). CONCLUSIONS AND RELEVANCE There is an ongoing epidemic of thyroid cancer in the United States. The epidemiology of the increased incidence, however, suggests that it is not an epidemic of disease but rather an epidemic of diagnosis. The problem is particularly acute for women, who have lower autopsy prevalence of thyroid cancer than men but higher cancer detection rates by a 3:1 ratio.

Importance Although growing evidence points to highly indolent behavior of encapsulated follicular variant of papillary thyroid carcinoma (EFVPTC), most patients with EFVPTC are treated as having conventional thyroid cancer.

Conclusions and Relevance: Among patients with asymptomatic, sonographically or cytologically benign thyroid nodules, the majority of nodules exhibited no significant size increase during 5 years of follow-up and thyroid cancer was rare. These findings support consideration of revision of current guideline recommendations for follow-up of asymptomatic thyroid nodules.

Thyroid cancer :While the chances of tests detecting a thyroid “abnormality”
are high, the risk it will ever cause harm is low.3 27 Analysis of
rising incidence shows many of the newly diagnosed thyroid
cancers are the smaller and less aggressive forms not requiring
treatment,28 which itself carries the risk of damaged nerves and
long term medication.3

23)  L. Furuya-Kanamori, K. J. L. Bell, J. Clark, P. Glasziou, S. A. R. Doi. Prevalence of Differentiated Thyroid Cancer in Autopsy Studies Over Six Decades: A Meta-Analysis. Journal of Clinical Oncology, 2016;
Differentiated thyroid cancer (DTC) incidence has been reported to have increased three- to 15-fold in the past few decades. It is unclear whether this represents overdiagnosis or a true increase in incidence. Therefore, the current study aimed to estimate the prevalence of incidental DTC in published autopsy series and determine whether this prevalence has been increasing over time.
Conclusion The current study confirms that iDTC is common, but the observed increasing incidence is not mirrored by prevalence within autopsy studies and, therefore, is unlikely to reflect a true population-level increase in tumorigenesis. This strongly suggests that the current increasing incidence of iDTC most likely reflects diagnostic detection increasing over time.