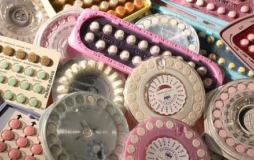 Sally is a 21 year old college student who comes into the office with her mother complaining of multiple complicated health problems over five years  including headache, weight gain, postural syncope, cardiac arrhythmia, and mood disturbance.  Over the past 5 years she has been to about 20 different doctors who have prescribed a long list of various medications including triptans for migraines, mineralcorticoids for the syncopal episodes, SSRI antidepressants for mood, etc.

It all started with an episode of abdominal pain five years ago, during which she was was rushed to the emergency room, told she had a “ruptured ovarian cyst” and sent home with pain pills.   A week later she was feeling better at her OB/Gyne office where she was offered birth control pills to prevent any further episodes of “troublesome ovarian cysts”.  Sally has been taking birth control pills ever since then, and its been five years now.  Sally states she is fearful of stopping the birth control pills as the cysts might return.

A better program includes cyclic progesterone on days 12-26 of the cycle, DIM (Di-Indole Methane) a broccoli extract, avoiding xeno-estrogens in the environment, and Iodine supplementation.(1-4)

I explained to Sally that because of her irrational fear of ovarian cysts, she has suffered from many years of adverse effects of the birth control pills.  trekking through many doctors offices where she has accepted many bizarre and obscure treatments. 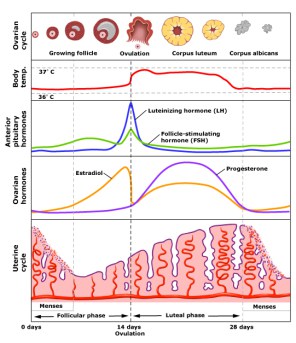 I showed Sally and her mom the ovulation chart (image left) and explained  monthly ovulation is normal in a healthy young women.  During ovulation there is rupture of the egg from the ovarian follicle into the peritoneal cavity.  This is nothing to be afraid of, as it indicates a normal, healthy cycling female. (see left chart showing ovulation on Day 11 courtesy of wikimedia)

However, my explanation fell upon deaf ears, as Sally was convinced she needed the birth control pills, and was determined to continue them.

Conclusion: Sally’s case is a good example of how irrational fears can be an obstacle preventing us from achieving health.  Birth control pills are synthetic hormones which do not normally occur in the human body and cause many adverse effects.  Best to avoid them.

Iodine deficiency may cause the ovaries to develop cysts , nodules and scar tissue. At its worse this ovarian pathology is very similar to that of polycystic ovarian syndrome (PCOS). As of the writing of this article I have five PCOS patients. The patients have successfully been brought under control with the use of 50 mg of iodine per day. Control with these patients meaning cysts are gone, periods every 28 days and type 2 diabetes mellitus under control.

All patients receive 50 mg iodine complex in capsule form twice daily for a period of eight weeks. In addition to the medication an advice for life style changes including regular exercise and low glycogen foods was advice.  There was marked improvement in the symptoms with return of regular menstrual cycles in almost all patients.

1. Reduce excess estrogen in the body by avoiding exposure to xenoestrogens and naturally promoting healthy estrogen metabolism through the use of DIM.

4) http://www.massageanddoula.com/blog/how-to-naturally-treat-ovarian-cysts
How to Treat Ovarian Cysts Naturally  8/14/2015
There is a certain conversation that I have had several times lately with both clients and other practitioners about ovarian cysts.  I have met several people who talk about “having to be” on birth control pills because they have ovarian cysts, but wanting to become pregnant.  Many years ago, I was also told that I must be on hormonal birth control in order to treat and prevent ovarian cysts.  Many of us are told that it is the only option, and are pressured or guilted into being on the pill.

“Functional ovarian cysts are common in women of reproductive age and are often asymptomatic.  Expectant management achieves similar cyst resolution rates to oral contraceptives, and is a better alternative.”

Women of reproductive age usually release an egg about once a month. The ovary gets an egg from the inside of the ovary to its surface by creating a blister or fluid-filled space around the developing egg. When the blister (or cyst) reaches the surface of the ovary, it bursts and releases the egg into the abdominal cavity. After this occurs, the blister can develop into another type of cyst, which makes a hormone (progesterone) that helps the pregnancy to grow. Most of these cysts come and go without problems. Sometimes, however, the cysts get large or painful; others may remain for months. Several decades ago, health care providers learned that women taking birth control pills had fewer cysts, since the pills usually kept an egg from being released. Based on this fact, many clinicians started treating these cysts with birth control pills to make them go away faster.
In March 2014, we did a computer search for all randomized controlled trials that studied use of birth control pills to treat these benign (also called functional) cysts. We wrote to researchers to find other trials. We found eight trials from four countries; they included 686 women. Three trials included women receiving drugs to help them get pregnant. The other five included women who developed cysts without fertility treatment. In none of these trials did oral contraceptives help the cysts go away faster. Thus, birth control pills should not be used for this purpose. A better approach is waiting two or three months for the cysts to go away on their own.
Abstract
Background: Functional ovarian cysts are a common gynecological problem among women of reproductive age worldwide. When large, persistent, or painful, these cysts may require operations, sometimes resulting in removal of the ovary. Since early oral contraceptives were associated with a reduced incidence of functional ovarian cysts, many clinicians inferred that birth control pills could be used to treat cysts as well. This became a common clinical practice in the early 1970s.
Objectives: This review examined all randomized controlled trials that studied oral contraceptives as therapy for functional ovarian cysts.
Search methods: In March 2014, we searched the databases of CENTRAL, PubMed, EMBASE, and POPLINE, as well as clinical trials databases (ClinicalTrials.gov and ICTRP). We also examined the reference lists of articles. For the initial review, we wrote to authors of identified trials to seek articles we had missed.
Selection criteria: We included randomized controlled trials in any language that included oral contraceptives used for treatment and not prevention of functional ovarian cysts. Criteria for diagnosis of cysts were those used by authors of trials.
Data collection and analysis: Two authors independently abstracted data from the articles. One entered the data into RevMan and a second verified accuracy of data entry. For dichotomous outcomes, we computed the Mantel-Haenszel odds ratio with 95% confidence interval (CI). For continuous outcomes, we calculated the mean difference with 95% CI.
Main results: We identified eight randomized controlled trials from four countries; the studies included a total of 686 women. Treatment with combined oral contraceptives did not hasten resolution of functional ovarian cysts in any trial. This held true for cysts that occurred spontaneously as well as those that developed after ovulation induction. Most cysts resolved without treatment within a few cycles; persistent cysts tended to be pathological (e.g., endometrioma or para-ovarian cyst) and not physiological.
Authors’ conclusions: Although widely used for treating functional ovarian cysts, combined oral contraceptives appear to be of no benefit. Watchful waiting for two or three cycles is appropriate. Should cysts persist, surgical management is often indicated.

The combined oral contraceptive pill (COCP) is no longer recommended, (see below)

Watchful treatment is appropriate if a simple functional cyst is < 10 cm in
diameter. The combined oral contraceptive pill (COCP) is no longer recommended,  as it does not hasten cyst resolution.

link to this article: http://wp.me/p3gFbV-3Cx