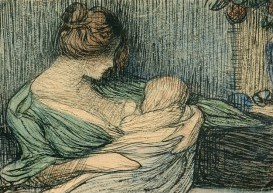 Cathy is a young mother still breast feeding a healthy newborn.  Cathy takes natural thyroid pills, selenium and Vitamin D for her Hashimotos’ auto-immune thyroid disease, which is doing well.  However, she now calls into the office reporting gastrointestinal symptoms of bloating, gas, abdominal discomfort, as well as “the Blues” a sort of depressed feeling.  Left Image: Mother and Child 1904 by Janis Rozentāls Courtesy of  Wikimedia Commons.

Doing Some Reading on the Internet 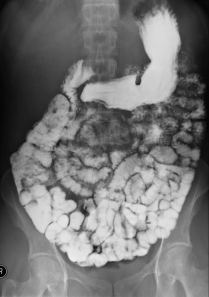 Cathy has been doing some reading on the internet and decided she has “Leaky Gut”, and she asks me to order a Leaky Gut test,  the (Lactulose/Mannitol) (L/M) test.  This is an easy home test kit.  The patient drinks a solution of two sugars, lactulose, and mannitol, and then collects a urine sample to send into the lab.  Mannitol is small molecule easily absorbed into the blood stream, whereas lactulose is a large one, and cannot enter the blood stream unless the gut barrier is porous, ie a Leaky gut.

The lab measures the two sugars in the urine sample and provides a ratio which reveals if a “Leaky Gut” is present.  Left Image; Small Bowel Barium Xray courtesy of Wikimedia commons.

Doing A Leaky Gut Test with a Home Kit 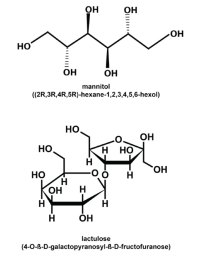 Cathy received the kit and did her test. Her L/M ratio was severely abnormal indicating a positive test for “Leaky Gut”.  On the phone, Cathy says she is sure everything started the last month of her pregnancy.  I replied, “That’s ridiculous.  I never heard of pregnancy causing Leaky Gut.”  I said, “wait a minute, let’s look it up”, turning to my keyboard on the desk, I typed in the key words to do a medline literature search.  The following article appeared:  Is a leaky gut involved in the pathogenesis of intrahepatic cholestasis of pregnancy? (1)

Cathy Was Right After All

Intrahepatic cholestasis of pregnancy is associated with elevated liver function tests, and patients may report pruritis (itchy skin) from elevated bilirubin.  In retrospect, Cathy’s labs during the last trimester of pregnancy showed transient elevation of her Liver Enzyme which returned to normal after deliver.  It looks like Cathy was right after all.  Her pregnancy caused her leaky gut and post-partum depression. 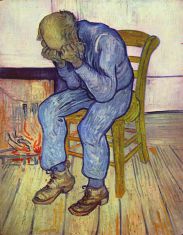 Painting by Vincent van Gogh (1853–1890) entitled “At Eternity’s Gate” May 1890, oil on canvas in the Kröller-Müller Museum. Courtesy of wikimedia commons.

Post Partum Depression is quite common, affecting 5-70% of women depending on study cited. The etiology is not well understood and various proposed treatments are not very effective.  Mainstream medical docs are quick to prescribe SSRI antidepressants for these women, failing to consider  “Leaky Gut” and associated brain inflammation in many of these patients.

How About Treatments for Intra-Hepatic Cholestasis of Pregnancy?

The etiology is not well understood.  Current medical thinking is that massive hormone production of pregnancy overwhelms the capacity of the liver to keep up with its role detoxifying the hormones, especially if SNP’s or mutations are present which may impair the liver from the beginning.

The Inflammatory Model of Depression

Michael Maes and others have proposed Leaky Gut, translocated LPS and elevated cytokines as an etiology for brain inflammation and depression.  Could this same mechanism be the culprit in Post Partum Depression ?

Increased gastrointestinal permeability has been demonstrated in several liver diseases. It may facilitate the absorption of gut-derived endotoxin-stimulating Kupffer cells to release proinflammatory cytokines or other potentially hepatotoxic compounds. We examined gastrointestinal permeability, plasma levels of anti-lipopolysacharides (anti-LPS), and four proinflammatory cytokines in 20 patients with intrahepatic cholestasis of pregnancy (ICP) compared with 22 normal pregnant and 29 non-pregnant women. Urinary excretion of sucrose and the urinary lactulose/mannitol (L/M) ratio after a standard oral load were used to assess gastrointestinal permeability. Anti-LPS (IgA, IgM, and IgG) were measured in peripheral blood by Human EndoCAb test kit; TNF-alpha, IL-1beta, IL-6, and IL-10 by Quantikine HS human immunoassays. Sucrose urinary excretion was similar in the three groups, indicating normal gastric permeability. The urinary L/M ratio was significantly higher in ICP than in the other groups [median (interquartile range): 0.018% (0.011-0.023) in ICP, 0.012% (0.009-0.016) in normal pregnancies, and 0.009% (0.008-0.012) in non-pregnant women, P < .01]. No significant differences were found in anti-LPS or cytokines plasma levels except slightly higher levels of IL-6 in ICP patients than in non-pregnant women (P < .05). Four of five women with abnormal urinary L/M ratio during ICP continued to show abnormalities in tests up to 2 years after delivery. In conclusion, an increased intestinal permeability was detected in ICP patients during and after pregnancy. A “leaky gut” may participate in the pathogenesis of ICP by enhancing the absorption of bacterial endotoxin and the enterohepatic circulation of cholestatic metabolites of sex hormones and bile salts.

The formation of large amounts of sulfated progesterone metabolites, possibly related to greater 5-α and 3-α reduction, may result in saturation of the hepatic transport system (s) utilized for biliary excretion of these compounds in some genetically predisposed women[11,14,15]

Previous investigations have indicated that S-adenosyl-L-methionine (SAMe) leads to reversal of estrogen-induced bile flow impairment in rats. This randomized, single-blind clinical trial was performed to determine whether SAMe reverses intrahepatic cholestasis of pregnancy (ICP) which occurs in hypersensitive women associated with increased estrogen levels in late pregnancy. Eighteen women with ICP were randomly divided into three groups of six and treated for 20 days as follows: Group I received 200 mg per day of i.v. SAMe; Group II received 800 mg per day of i.v. SAMe; Group III served as control. At the beginning of the study, clinical and biochemical parameters were similar among groups. After 10 and 20 days of treatment with the higher dose of SAMe, the mean values of serum transaminases, conjugated bilirubin and total bile acids fell significantly in respect to initial levels; opposite results were found in the other two treatment groups. The final values of these selected parameters were lower in the group of subjects treated with 800 mg per day SAMe than in the other two groups of women. Pruritus graded on a 0 to 4+ scale significantly was reduced only in patients treated with the higher dose of SAMe. These results indicate a trend toward remission of ICP in women treated with 800 mg per day SAMe and suggest that SAMe administration may be a new therapeutic modality for ICP.
4) http://journals.lww.com/amjmedsci/Abstract/1987/04000/S_Adenosylmethionine_Counteracts_Oral.6.aspx
FREZZA, MARIO, et al. “S-Adenosylmethionine Counteracts Oral Contraceptive Hepatotoxicity in Women.” The American journal of the medical sciences 293.4 (1987): 234-238.

Previous experimental and clinical investigations have pointed out a causal relationship between estrogens and the impairment of bile secretory apparatus, resulting in lithogenic bile and cholestasis. Recent studies have also shown that S-adenosylmethionine (SAMe) counteracts both estrogen-induced bile cholesterol supersaturation and intrahepatic cholestasis. The aim of this investigation was to verify whether SAMe could also reverse the abnormalities of some liver function tests that may develop in susceptible women after the intake of estrogen-containing oral contraceptives. Twelve women out of a group of 228 subjects exhibited abnormal blood values of transaminases, antithrombin III or bile acids after two cycles of a contraceptive pill containing 30 meg ethynylestradiol. These subjects volunteered to receive the same contraceptive pill plus oral SAMe (600 mg/day) for another two cycles. Due to the small number of cases who developed abnormal hepatic function tests after oral contraceptive, it was not possible to divide them into a control group who continued on the “pill” plus placebo and a treatment group in whom SAMe was given with the oral contraceptive. In all cases the administration of SAMe induced the normalization of liver function tests. If further clinical trials confirm these findings, it may be possible to propose SAMe administration to women at an increased risk of developing estrogen-related hepatotoxicity.

BJOG. 2004 Jan;111(1):17-21.
A randomised controlled trial of ursodeoxycholic acid and S-adenosyl-l-methionine in the treatment of gestational cholestasis.
Roncaglia N1, Locatelli A, Arreghini A, Assi F, Cameroni I, Pezzullo JC, Ghidini A.

In the current review, the prevalence of postpartum depression by self-reported questionnaire in developed countries varies from 1.9% to 82.1%, with the lowest reported in Germany and the highest in the United States (Table 2)

Link to this page