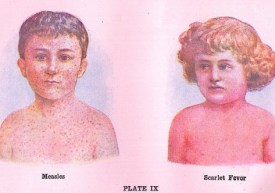 Which is Greater Threat, Measles or Measles Vaccine?

Which is Greater Threat, Measles or Measles Vaccine? by Jeffrey Dach MD

A recent measles outbreak at Disneyland of at least 70 cases (Jan 2015) has created quite a stir in the media.  Five of the cases were fully vaccinated, indicating the measles vaccine confers only temporary immunity. Clearly there is no “failure to vaccinate”, as measles has broken out in highly vaccinated populations.  It is obviously a failure of the vaccine.  Unlike the vaccine, real measles infection confers life-long immunity.

This article is part two.  For part one, click here. 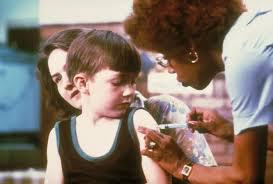 In 2008, a similar resurgence in measles cases was reported.  An increase in reported cases of measles from 42 to 131 prompted a 2008 New York Times editorial warning of re-emergence of “many diseases” if vaccination rates drop. A quote from the New York TImes:

“If confidence in all vaccines were to drop precipitously, many diseases would re-emerge and cause far more harm than could possibly result from vaccination.”

Confidence in Vaccines Has Been Lost

What is the Evidence for an Autism/ Vaccine Link? 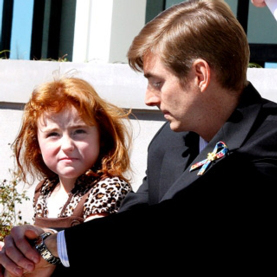 In the case of Hannah Poling, the federal vaccine court has agreed to compensate Poling’s family, conceding that her autism was caused by vaccination. Two more “Vaccine Court” awards for vaccine-induced autism are reported in an article on Huffington Post by David Kirby, Ryan Mojabi and Emily Moller, two children with vaccine-induced autism.  The federal court has already paid out more than $1.5 billion for vaccine related injury or death.

In 2012, the Italian Health Ministry conceded the MMR vaccine caused autism in nine-year-old Valentino Bocca.  Exactly how many other cases exist is unknown because court records are usually sealed from public view.  Left Image:Hannah Poling and father courtesy of Scientific American and AP PHOTO W.A.HAREWOOD

An important finding was found in a 2002 report in Biomedical Science by Dr. Singh entitled ” Abnormal measles-mumps-rubella antibodies and CNS autoimmunity in children with autism.”

“Stemming from this evidence, we suggest that an inappropriate antibody response to MMR, specifically the measles component thereof, might be related to pathogenesis of autism.”

“In light of these new findings, we suggest that a considerable proportion of autistic cases may result from an atypical measles infection that does not produce a rash but causes neurological symptoms in some children. The source of this virus could be a variant MV or it could be the MMR vaccine.”

Another research group found elevated anti-nucleosome antibodies in autistic children.   These are auto-antibodies directed at the child’s own DNA.  Their study was published in Journal of Neuroinflammation 2014 entitled, “Serum antinucleosome-specific antibody as a marker of autoimmunity in children with autism”   The nucleosome consists of 146 base pairs of double stranded DNA, wrapped twice around a protein core.

Immune Dysregulation with Neuro-inflammation in Autism

In a review of the pathology of autism, Dr Noriega says there is: “neuro-inflammation in the brain associated with profound…. dysregulation in the immune system leading to the rapid development of Autism Spectrum Disorder (ASD) in genetically susceptible children.”  From Noriega et al “Immune dysregulation in autism spectrum disorder.” European journal of pediatrics 2014: 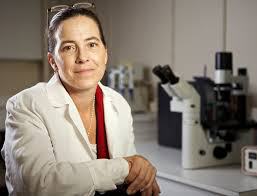 In the 1980’s manufacturing of vaccines switched from  animal cell cultures such as chicken embryo, to live aborted human fetal cell cultures (labeled WI-38, MRC-5).  Click Here for a list of these new vaccines.

Theresa A. Deisher, Ph.D., founder of  Sound Choice, has raised the alarm bells on fetal cell contaminants in  vaccines which trigger auto-immunity in two ways.  The virus is grown on human fetal cells.  The human DNA from the fetal cell substrate ends up in the final vaccine as a contaminant which induces auto-immunity.   Secondly, the human fetal cell cultures are known to be infected with a retrovirus, HERV-K, which contaminates the vaccine.  Once injected into the child, the HERV-K inserts mutated DNA fragments into the child’s stem cell genome, wreaking havoc with the child’s immune system and neuro-development. Left image courtesy of Theresa A. Deisher, Ph.D., founder of  Sound Choice,

Change Points in Incidence of Autism in Various Countries

Theresa A. Deisher, Ph.D.has published an important paper revealing Change Points in the incidence of autism in various countries, US, UK, Australia, and Scandanavian Countries.  These change points correspond to the year in which these countries introduced vaccines using aborted human fetal cell cultures.  Dr Deisher’s paper was published in 2014 and can be read here:.Impact of environmental factors on the prevalence of autistic disorder after 1979 by Theresa A Deisher .

Below chart courtesy of Theresa Deisher and Sound Choice.  This chart shows change point in incidence of autism in US corresponding to introduction of three different human fetal cell derived vaccines. 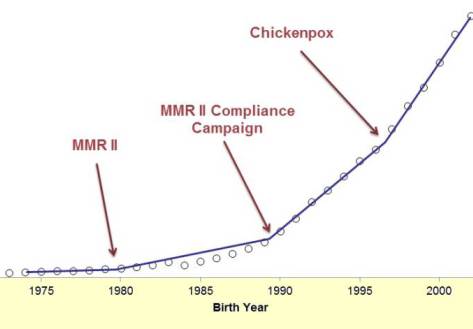 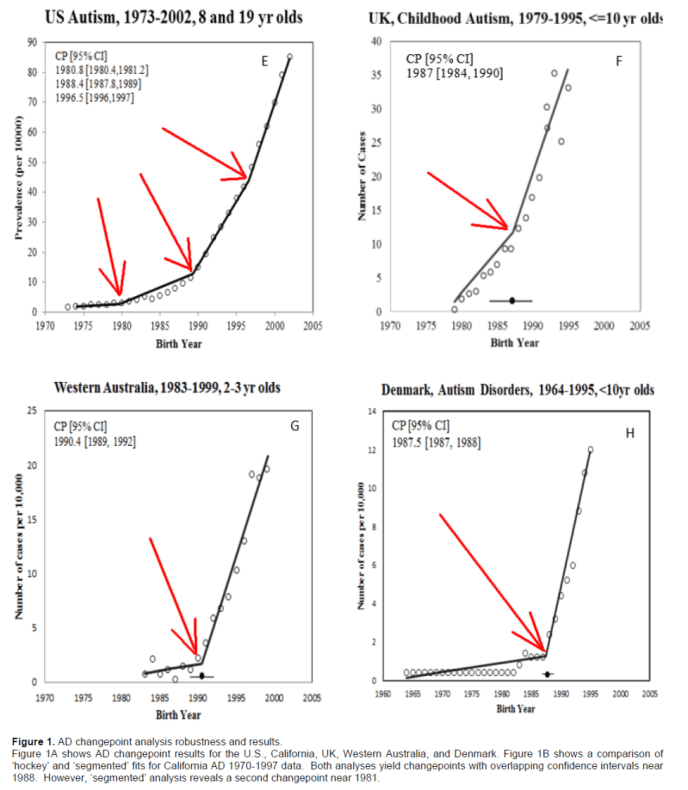 Skip forward 21 minutes to the important part of the talk.

1) the current  autism epidemic is global.
2) Autism Disorder is temporally associated with use of human fetal cell lines for vaccine manufacture.
3) Auto-immunity and insertional mutagenesis can be triggered by human fetal manufactured vaccines.
4) The risks of childhood vaccines containing human fetal DNA and retroviral fragment contaminants.

Call your congressman now to have Dr. Theresa Deisher sent to Washington to ban fetal cell vaccines, initiate new safety studies.  Alternative safer manufacturing techniques are easily available.   Animal cell vaccines can be used instead of fetal human cell cultures to grow the viruses.  The switch can be done easily to make our vaccines safer.

According to Bernadine Healy MD, Director of the National Institute of Health (NIH) in 1991, there is credible published, peer-reviewed scientific studies that support the idea of an association between autism and vaccines.  Rather than oppose all vaccinations, Dr Healy suggests modifying the vaccination schedule to make them safer.  Left Image Courtesy of Bernadine Healy MD Huffington Post.

How to Make the Vaccine Schedule Safer?

Don Miller MD in this article on Lew Rockwell, provides a safer vaccination schedule. For example, the vaccination schedule can be made safer by waiting until child’s immune system is better developed after age 2, by moving from the combined MMR shot to individual doses, avoiding thimerosol, and avoiding the live vaccines.

Which is the Greater Threat Autism or Measles? 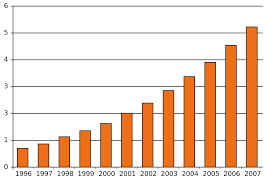 Left chart Increasing autism cases: Reports of autism cases per 1,000 children grew dramatically in the U.S. from 1996 to 2007 courtesy of wikimedia.

While the number of autism cases are increasing, measles cases are decreasing.

Mortality from measles decreased in US and UK from 1900 to 1963, even before first vaccines were introduced in 1963. (see below charts courtesy of Measles and measles vaccines fourteen things to consider by Roman Bystrianyk ) 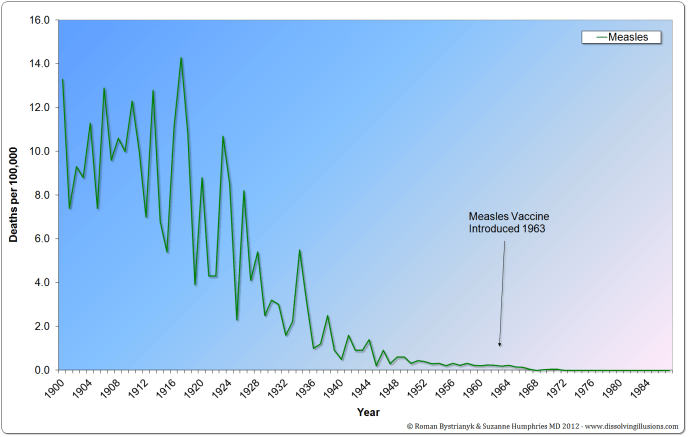 Above chart : Mortality from measles in the US. 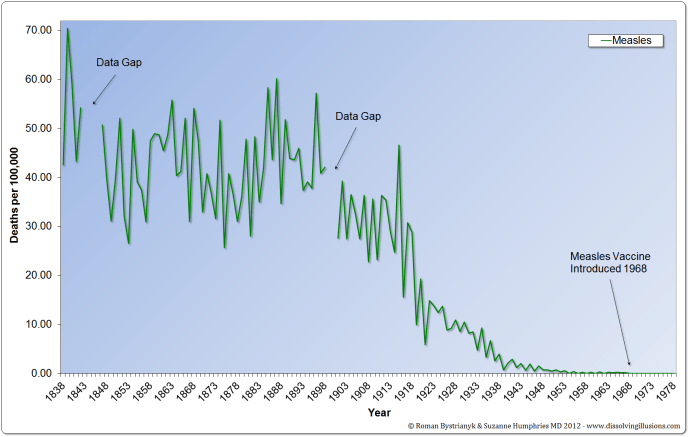 Above chart:  Mortality from measles in the UK.

Introduction of the measles vaccine in 1963 was successful.  The measles vaccine (live virus) reduced the number of measles cases, and prevented about 100 deaths per year.  Prior to 1963, mortality from measles had already dropped to low levels from improved living standards, better nutrition, and and sanitary measures.

“Since the measles vaccine came into widespread use in this country this disease has virtually disappeared, and it has prevented 100 deaths a year. But now, instead, several thousand normally developing children become autistic after receiving their MMR shot. Termed “regressive autism,” it accounts for about 30 percent of the 10,000 to 20,000 children who are diagnosed with autism in this country each year.”

3) Wait until age of two to start, then vaccinate no more than once every six months, one at a time, in order to allow the immune system sufficient time to recover and stabilize between shots.

Vitamin A and Measles

Numerous medical publications have shown health benefits for Vitamin A in treatment of measles. Thus, the practice of supplementing with cod-liver oil which contains high amounts of vitamin A.  Another old preventive is cinnamon oil.  See this old 1917 article by Dr Drummond: Cinnamon As A Prophylactic In Measles .

In the 1940’s and 1950’s, the availability of refrigeration, fresh fruits and vegetables improved nutrition levels.of children.  This explains the dramatic reduction in mortality from measles prior to the 1963 introduction of measles vaccine.

Conclusion:   Clearly, there is a trade off in terms of benefits and risks of vaccines.  Rather than deny the adverse effects of vaccines, we should be openly discussing how to make the vaccine schedule safer, as Don Miller MD and Bernadine Healy MD suggest.

As Dr Theresa Deisher has said, parents are advised to decline the newer fetal cell based vaccines, as these may be the environmental trigger for the autism epidemic, based on change points in the incidence charts. Vaccine alternatives are available. 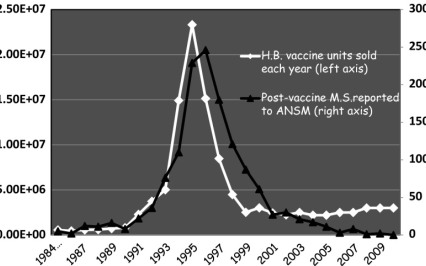 Left chart is figure 2 from Le Houézec, Dominique. “Evolution of Multiple Sclerosis in France since the Beginning of Hepatitis B Vaccination.” Immunologic Research 60 (2014): 219–225. 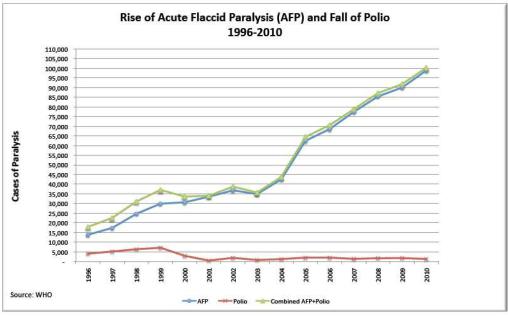 Do Vaccinations Cause Autism?

Dr. Deisher testifies at the MN House about vaccine safety. She presents research demonstrating a link between the rise in the rates of autism and the use of aborted fetal cells in the production of vaccines. Dr. Deisher is the president and founder of SoundChoice, a non-profit that works to provide safe vaccination.

Is aborted fetal DNA linked to autism? By Theresa A. Deisher, Ph.D.

Al-Ayadhi, Laila Yousef, and Gehan Ahmed Mostafa. “Serum antinucleosome-specific antibody as a marker of autoimmunity in children with autism” Journal of neuroinflammation 11.1 (2014): 69.

David Brownstein MD on Vaccination for measles : Should Mickey and Minnie Mouse be Vaccinated ?

http://www.huffingtonpost.com/2008/08/21/us-measles-cases-highest_n_120493.html
Measles Cases Highest In A Decade Due To Vaccination Fears

Mayo Clinic Expert Confirms Measles Vaccine Is Failing – So it’s NOT the unvaccinated .May 4, 2014 by ChildHealthSafety

http://en.wikipedia.org/wiki/Bernadine_Healy
Bernadine Patricia Healy (b. August 4, 1944) is a cardiologist and a former head of the National Institutes of Health (NIH) and the American Red Cross. She is a senior writer for US News & World Report. Healy is a life-long Republican. Appointed in 1991 by President George H. W. Bush to be the first female head of the NIH, institutes. Left when another director was appointed after the election of President Bill Clinton in 1993.  Healy is the best-known “mainstream” American physician to speak out in opposition to the academicians and officials who either deny the existence of a pandemic or any chance of a link to vaccines. She asks why, over the past decade, the government hasn’t compared the autism/ADD rate of unvaccinated children with that of vaccinated children. And why do some in government treat vaccines as an all-or-nothing proposition? Either everybody gets vaccinated at the same time with the same vaccines, or nobody will get vaccinated and long-gone deadly diseases will re-emerge. “Personalized medicine” is done in virtually all areas of medicine today—except with vaccines,

According to Healy, when she began researching autism and vaccines she found credible published, peer-reviewed scientific studies that support the idea of an association.

The material on this site is provided for educational and informational purposes. It may contain copyrighted material the use of which has not always been specifically authorized by the copyright owner. It is being made available in an effort to advance the understanding of scientific, environmental, economic, social justice and human rights issues etc. It is believed that this constitutes a ‘fair use’ of any such copyrighted material as provided for in section 107 of the US Copyright Law. In accordance with Title 17 U.S.C. Section 107, the material on this site is distributed without profit to those who have an interest in using the included information for research and educational purposes.   The information on this site does not constitute legal, medical  or technical advice.

This article may be reproduced on the internet without permission, provided there is a link to this page and proper credit is given.

The post Which is Greater Threat, Measles or Measles Vaccine? appeared first on Jeffrey Dach MD .