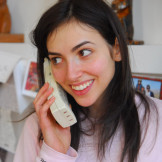 A Young Mom WIth Hashimotos Thyroiditis

Christina had low iodine levels. Her baseline urinary iodine excretion was 49 mcg/L indicating moderate iodine deficiency based on WHO Guidelines.(1)  Iodine supplements were given to correct this.

After six months on our treatment program which includes iodine supplementation and prenatal vitamins containing methyl folate, Christina calls to share the good news. She is expecting !!

Why is Iodine So Important?
Raising Baby IQ with Iodized Salt

In 1924 iodized salt was introduced in the US, and average IQ increased by 15 points in iodine deficient areas of the country according to studies on military recruits.  Global programs to eliminate iodine deficiency have also improved IQ in other countries.  See universal salt iodization by Sullivan 1995.

Maternal iodine deficiency is the single most common cause of preventable mental retardation in children, and is a global health problem addressed by the World Health Organization.(5-7)

In spite of Iodized salt in the US, one third of young women have low iodine levels placing the baby at risk for neuro-developmental delay (2-4).  Low maternal iodine level is a preventable cause of mental retardation.(2)  As noted above, low maternal iodine levels have a deleterious effect on the baby’s brain development and IQ scores.  In many countries, screening programs have been instituted to detect Congenital Hypothyroidism caused by iodine deficiency so the babies can be treated immediately.  Left Image Smiling Baby courtesy of Wikimedia Commons.

Although Iodine deficiency is the topic of this article, we will now discuss the other side of the coin, “Maternal Iodine Excess” causing “Transient Congenital Hypothyroidism in the newborn” reported in the pediatric literature. (15)  For this reason, for maternal iodine intake, we recommend the range of 225-450 mcg/day,  well below the 1,100 mcg per day upper limit set by the Food and Nutrition Board (FNB) of the Institute of Medicine.

Asian cultures such as Japan and Korea, mothers consume kombu soups containing sea weed with high iodine content, (2000-3000 mcg per day), and elevated TSH levels suggesting hypothyroidism may be discovered  in the newborn baby during congenital hypothyroidism screening. (16-18)  These cultural practices have been followed for centuries, while only recently the newborn thyroid screening programs been established. (16-18)

Iodine Is a Supplement Available at the Health Food Store

For anyone thinking of supplementing with Iodine, I would recommend seeking out and working closely with a knowledgeable physician who can  monitor iodine levels, thyroid function, and supervise your  program.  For a list of iodine-literate practitioners click here.

Making sure our moms-to-be have healthy Iodine levels will produce more intelligent babies with higher IQ.

According to data from the National Health and Nutrition
Examination Survey (NHANES), the median urinary iodine
concentration in U.S. adults decreased by over 50% from the
early 1970s to the late 1990s (10). Of particular concern in the
NHANES data is that the prevalence of urinary iodine
values < 50 lg/L among women of childbearing age increased
by almost fourfold, from 4% to 15%, during this period.

Reductions in U.S. dietary iodine have been variously ascribed to a possible reduction in the iodine content of dairy products, the removal of iodate dough conditioners in commercially produced bread, new recommendations for reduced salt intake for blood pressure control, the recent increased use of Kosher and sea salts (which contain no iodine), and the increasing use of noniodized salt in manufactured or ‘‘pre-made’’ convenience foods (13).

The economists found that in the lowest-iodine areas—the bottom quarter of the study population—the introduction of iodized salt had stark effects. Men from these regions born in 1924 or later were significantly more likely to get into the Air Force and had an average IQ that was 15 points higher than their predecessors.

Iodine deficiency is the leading cause of preventable mental retardation in the world today. The condition, which was common in the developed world until the introduction of iodized salt in the 1920s, is connected to low iodine levels in the soil and water. We examine the impact of salt iodization on cognitive outcomes in the US by taking advantage of this natural geographic variation. Salt was iodized over a very short period of time beginning in 1924. We use military data collected during WWI and WWII to compare
outcomes of cohorts born before and after iodization, in localities  that were naturally poor and rich in iodine. We ˝find that for the one quarter of the population most deficient in iodine this intervention
raised IQ by approximately one standard deviation. Our results can explain roughly one decade’s worth of the upwardtrend in IQ in the US (the Flynn Effect). We also document a large increase in thyroid
related deaths following the countrywide adoption of iodized salt, which affected mostly older individuals in localities with high prevalence of iodine deficiency.

Interpreting our measure in terms of IQ, our nding is that in iodine-decient regions, iodization raised IQ scores by roughly one standard deviation, or 15 points. Given that one-quarter of the population lived in such regions, this implies a nationwide increase in average IQ of 3.5 points.

In 1924, The Morton Salt Company, the largest salt producer in the United States, began nationwide distribution of iodine-fortified salt. Access to iodine, a key determinant of cognitive ability, rose considerably, leading to increased intelligence quotients particularly in places where deficiency was previously rampant. We compare outcomes for cohorts exposed in utero to iodized salt to slightly older, unexposed cohorts, across individuals born in states with previously high versus low iodine deficiency rates. We document substantial impacts of salt iodization. High school completion rose by nearly 6 percentage points, and labor force participation went up by 1 point. Analysis of income transitions by quantile shows that new
labor force joiners entered at the bottom of  the wage distribution and took up blue collar jobs, pulling down average wage income conditional on employment. Our results inform the ongoing debate on salt iodization in many low-income countries. We show that blanket
iodized salt distribution in fact had a very targeted impact, benefiting the worker on the margin of employment, and generating sizeable economic returns at low cost.

10) Iodine: Its Role In Health and Disease  Some New Exciting Concepts  Michael B. Schachter, M.D.