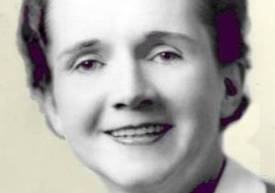 Although Rachel Carson was a marine biologist, I believe she deserves recognition as one of the “Great Women In Medicine” .  I will explain why.

Her landmark book, “Silent Spring”, is credited with motivating the government to create the Environmental Protection Agency in 1970 and the banning of DDT in 1972, both of which had enormous health benefits for the population.  (1)(2)(3)(4)(5)(28)

The title “Silent Spring”, refers to the mass extermination of the bird population from indiscriminate spraying of DDT over the fields.  The songbirds died from eating DDT laden insects.

Rachel Carson died from breast cancer in 1964 and was posthumously awarded the Presidential Medal of Freedom by Jimmy Carter in 1980. The Post Office in Rachel Carson’s home town, Springdale, Pennsylvania, was named in her honor on May 27, 2008.

The History of DDT and the Chemical Industry

The post-war era of the nineteen forties and fifties saw massive expansion of manufacture and sale of chemical pesticides such as DDT.   These chemical agents were considered safe, and DDT was indiscriminately sprayed from passing trucks and planes onto agricultural fields and residential areas.

At the same time, there was hysteria arising from the polio epidemic, and the media falsely spread the misguided notion that using DDT to kill insects somehow prevented the spread of polio.  DDT can not prevent polio.  See this 1946 newsreel documenting the misguided spraying of DDT in San Antonio Texas ordered by Heath Dept. director Mr.Crittenden, May, 1946 in an ill-fated attempt to wipe out polio. Many other cities joined in, like Rockford, Illinois, and Paterson, New Jersey.

The Power of the Mass Media

The mass media and government in league with the chemical industry lulled the complacent population into a sheep-like acceptance of these poisons.   See video below:

Rachel Carson bravely took on the entire Chemical Industry who fought back by hiring their own “experts”, goons with scientific credentials, to attack her work.  The attacks back fired, providing even more media attention to her work and the health dangers of pesticides.

Rachel Carson brought to public attention the fact that pesticides sprayed on our food supply move right up the food chain to us humans where they build up in the tissues of the body causing hormonal disruption, toxic effects on the nervous system and increased cancer risk.(28)

One should notice that the chemical structure of DDT is very similar to DES (Diethylstilbestrol), a synthetic estrogen which was banned because it causes cervical cancer in the daughters of women given DES during pregnancy. (11) (12) (12a) (13)

DDT was banned in 1972, and DES was banned in 1971. The Silent Spring Institute continues the legacy of Rachel Carson, and has focused on chemicals in the environment which cause breast cancer as hormonal disruptors and neurotoxins. (14)

Above Image: Activist and author Rachel Carson, whose book “Silent Spring” led to a study of pesticides, testifies before a Senate Government Operations Subcommittee in Washington, D.C. on June 4, 1963. Carson urged Congress to curb the sale of chemical pesticides and aerial spraying. (AP Photo)

The answer is yes. The pesticide-breast cancer link was clearly shown in research from Israel which linked three pesticides found in dairy products to increased cancer in mice. After a public outcry in 1978, the Israeli government was forced to ban the three pesticides, Benzene Hexachloride, DDT, and Lindane .

After the banning of these pesticides in Israel, breast cancer mortality rates (which had increased every year for 25 years), dropped nearly 8 per cent for all age groups and dropped more than a thirty-three percent for women ages 25-34 in 1986. (9) (10)

Thanks to efforts made by Rachel Carson, the Silent Spring Institute, and others, the EPA has banned the following endocrine disruptor chemicals: PCBs, chlordane, DDT, aldrin, dieldrin, endrin, heptachlor, kepone, toxaphene, and 2,4,5-T . (15)

Rachel Carson’s work reminds us to avoid these toxic chemicals and hormone disruptors. By doing so, we may reduce the risk of breast cancer, and neurodevelopmental abnormalities in children. (28)

Other scientists such as Theo Colborn have continued Rachel Carson line of investigation with the book, Our Stolen Future,  which describes in detailed scientific terms the effect of endocrine disruptor chemicals on the developing fetus of animals in the wild as well as in us humans. (16) (17) (18)

One example from Theo Colborn’s book describes infertility caused by pesticides in Florida Alligators, attributed to DDT and other pesticides dumped into the Everglades and detected in the egg shells. (19) (20)

A major cause of infertility is PCOS, Poly Cystic Ovary Syndrome.  PCOS has been linked to neonatal exposure to the endocrine disruptor chemical BPA (Bisphenol-A) causing the the increasing epidemic of PCOS affecting 10-20% of the female population. In experimental animals, neonatal exposure to BPA (Bisphenol-A) results in a PCOS-like syndrome.  In addition, there is elevated BPA levels in PCOS patients.  For more on this see my  article: PCOS, BPA and Endocrine Disruptors.

1. Use glass containers instead of plastic containers.

3. Avoid Pthalates, endocrine disrupting compounds that have been associated with cancer, impaired fertility, and male birth defects. Pthalates are found in hundreds of products including shampoo, lotion, perfume, cosmetics, vinyl and plastics, including toys.

5. Go Organic to reduce your exposure to pesticides.

6. Down the Drain.  Never put cleaning solvents, pesticides, paint thinners, automobile oil, or gas down a drain.  These pollute the environment.

7. Vacuum cleaners?. Vacuums with HEPA filters are best to avoid recycling dust back into the air.

9. Use organic gardening and lawn care.

10. City Hall.  Encourage your city or town to use  natural/non-toxic solvents in public buildings, schools, and organic practices for green spaces.

Iodine testing and supplementation is the cornerstone of our breast cancer prevention program as discussed in previous articles. (20)

In addition to Iodine, we also include I3C (Indole-3 carbinol) and DIM (Di-Indole Methane).  These are broccoli extracts available as nutritional supplements which have beneficial effects on estrogen metabolism. (21) (22) (23) (24) (25)

Without boring you with the biochemistry, suffice it to say that the the breakdown and elimination of estrogen by the liver is beneficially diverted towards the 16 hydroxy pathway to estriol and away from the 2 hydroxy pathway which requires a methylation reaction. The net result is a decrease in breast cancer risk with the use of DIM.

Although DDT agricultural use was banned in 1972, its use against mosquito-born malaria disease was never banned and continues to present day in various third world countries. In 2006, the World Health Organization promoted indoor residential DDT  spraying for malaria control in epidemic and endemic areas.(33)  Malaria eradication by controlling the mosquito population is a high priority for society and has enormous health benefits.  DDT and other chemical agents have been enormously helpful.  This cannot be doubted.  However these chemical agents must be used with care to avoid human toxicity, and to prevent development of insect resistance through over-use.(33)

Rachel Carson deserves to be included in the list of “Great Women in Medicine”.   The medical profession is entrusted with guarding the health of the community.  When the time came to warn about indiscriminate spraying of DDT on agricultural and residential areas, where was the medical profession? They were nowhere to be found. They were silent and complicit in this great cover-up.   Instead, leading the battle was one small, frail woman who stood up against the powerful interests of the chemical industry.  That small voice of truth and reason was Rachel Carson.

Is Your Baby Toxic from Environmental Pollution?

(10a) Jerome B. Westin and Elihu Richter of the Unit for Environmental and Occupational Medicine of Hebrew University-Hadassah School of Medicine in Jerusalem. Annals of the New York Academy of Sciences, vol. 609, 1990.

27) http://www.youtube.com/watch?v=vbtp2B-IFmw
Uploaded on Mar 12, 2008  This 2006 History Day documentary was completed by Samuel Hudnet and Justin Tibbels and won the silver medal at the National History Day 2006 contest.   MDHumanitiesCouncil

30) http://www.ncbi.nlm.nih.gov/pubmed/24121005
Neurotoxicology. 2013 Dec;39:158-68. . Epub 2013 Oct 9.
Neurodevelopmental effects in children associated with exposure to organophosphate pesticides: A systematic review.
Muñoz-Quezada MT, Lucero BA, Barr DB, Steenland K, Levy K, Ryan PB, Iglesias V, Alvarado S, Concha C, Rojas E, Vega C.Many studies have investigated the neurodevelopmental effects of prenatal and early childhood exposures to organophosphate (OP) pesticides among children, but they have not been collectively evaluated. The aim of the present article is to synthesize reported evidence over the last decade on OP exposure and neurodevelopmental effects in children. The Data Sources were PubMed, Web of Science, EBSCO, SciVerse Scopus, SpringerLink, SciELO and DOAJ. The eligibility criteria considered were studies assessing exposure to OP pesticides and neurodevelopmental effects in children from birth to 18 years of age, published between 2002 and 2012 in English or Spanish. Twenty-seven articles met the eligibility criteria. Studies were rated for evidential consideration as high, intermediate, or low based upon the study design, number of participants, exposure measurement, and neurodevelopmental measures. All but one of the 27 studies evaluated showed some negative effects of pesticides on neurobehavioral development. A positive dose-response relationship between OP exposure and neurodevelopmental outcomes was found in all but one of the 12 studies that assessed dose-response. In the ten longitudinal studies that assessed prenatal exposure to OPs, cognitive deficits (related to working memory) were found in children at age 7 years, behavioral deficits (related to attention) seen mainly in toddlers, and motor deficits (abnormal reflexes) seen mainly in neonates. No meta-analysis was possible due to different measurements of exposure assessment and outcomes. Eleven studies (all longitudinal) were rated high, 14 studies were rated intermediate, and two studies were rated low. Evidence of neurological deficits associated with exposure to OP pesticides in children is growing. The studies reviewed collectively support the hypothesis that exposure to OP pesticides induces neurotoxic effects. Further research is needed to understand effects associated with exposure in critical windows of development.

Links to Breast Cancer and Pesticides :

33) http://www.ncbi.nlm.nih.gov/books/NBK1724/
Dichlorodiphenyltrichloroethane (DDT) for Indoor Residual Spraying in Africa: How Can It Be Used for Malaria Control?
Shobha Sadasivaiah, Yeºim Tozan, and Joel G. Breman.

Conflict of Interest Disclaimer: We receive no money from the pharmaceutical industry or from the NIH. We do not sell any products to the public at large. We do however, make available selected nutritional supplements to our office clients at a small markup to cover our costs.

The reader is advised to discuss the comments on these pages with his/her personal physicians and to only act upon the advice of his/her personal physician Also note that concerning an answer which appears as an electronically posted question, I am NOT creating a physician — patient relationship.  Although identities will remain confidential as much as possible, as I can not control the media, I can not take responsibility for any breaches of confidentiality that may occur.  Finally, the material produced by myself may be reproduced for personal use, provided that appropriate credit is given.

Copyright (c) 2012-13 Jeffrey Dach MD All Rights Reserved. This article may be reproduced on the internet without permission, provided there is a link to this page and proper credit is given.