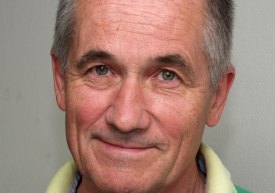 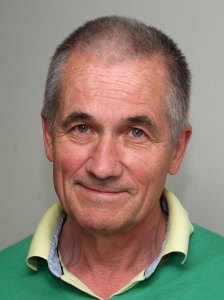 See the video presentation below by Dr. Peter Gotzsche on how modern medicine has become an organized crime syndicate..

Dr. Peter C Gøtzsche is an internist MD in Copenhagen, Denmark.  He is also a University professor and Director of The Nordic Cochrane Centre.

A Short Biography of Peter Goetzsche :

Dr Gotzsche’s work is widely known.  He has published more than 50 papers in “the big five” medical journals (BMJ, Lancet, JAMA, Ann Intern Med and N Engl J Med) and his scientific works have been cited about 9,000 times. He is author of “Rational Diagnosis and Treatment. Evidence-Based Clinical Decision-Making” (2007) and Mammography Screening: truth, lies and controversy (2012).(1) 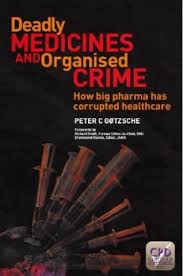 Fraud means deception and embezzlement.  Dr Gotzsche looked at the 10 biggest drug companies.  All 10 had a pattern of repeated fraud in past 5 years which qualify as the definition of organized crime.  Only one of the 10 companies was convicted- Pzfizer, (the worlds largest drug company)  but the other 9 are equally guilty of committing the same offenses, and live up to the criteria for organized crime.

Medication is the #3 cause of death in the US

It is commonplace for the elderly to be treated with 5 or 10 medications with unpredictable adverse effects. It’s quite harmful. If we kill so many people with our medications, then something must be terribly wrong. 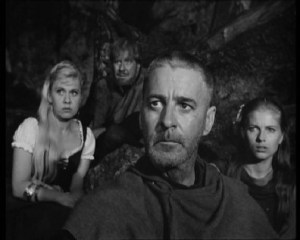 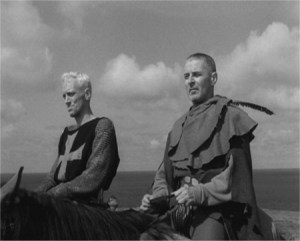 Dr Gotzsche reminds me of the squire in the 1957 movie classic, the Seventh Seal by Igmar Bergman, with Max Von Sydow as the Knight returning from Crusades during the Black Plague in medieval Europe. They question everything as they go.

Burning a Young Witch at the Stake

In one memorable scene, the two come upon a young maiden about to be burned at the stake as a witch.  The Knight looks into her eyes and says he sees only a frightened girl, not a witch.

Like the medieval knight and squire of the Seventh Seal, Dr Gotzsche also questions a few things.  For starters, he questions the fraudulent behavior of modern medicine.

The talk begins with an amusing skit – a colleague plays a pregnant patient who is offered a test for depression, which would lead to a prescription of SSRI drugs.  The lady eventually declines the test claiming she is not depressed.

The book has 2 chapters on prescribing patterns in psychiatry which Dr. Gotzsche describes as “Borders on criminal behavior”.  He discusses ssri’s and zyprexa – atypical antipsychotics.  He describes a colleague who tapers more kids off the meds than on the meds.  She was pressured to quit.

He had a number of debates on television with others.  The Tina Houman Debate on TV- suicide in kids on SSRIs.  The lars Kessing debate.

A girl in the audience asks, once you taper off the SSRI medication what is the replacement? Dr Gotzsche responds: Healthy people who took SSRI drugs became suicidal.  Exercise is just as good for depression as SSRI’s.  Psychotherapy (without drugs) is also effective.

Another question from a man in the audience – a lot of things were brought out in the 1980’s.  Why has no politician said anything ?

Its time for patient disobedience from the idea of lifelong medication with SSRI’s and other psych meds.  He compares tapering off SSRIs and psych meds to the same experience Junkies goes through when they stop the addictive drug..

Watch the video.  I found it most illuminating.

Here is the Video presentation by Dr Gotzsche in Danish with English subtitles:

link to video on You Tube: https://www.youtube.com/watch?v=i1LQiow_ZIQ

1) http://www.cochrane.dk/about/profiles/pcg-profile.htm
Director of The Nordic Cochrane Centre, Professor Peter C Gøtzsche graduated as a master of science in biology and chemistry in 1974 and as a physician 1984. He is a specialist in internal medicine; worked with clinical trials and regulatory affairs in the drug industry 1975-1983, and at hospitals in Copenhagen 1984-95. He cofounded The Cochrane Collaboration in 1993 and established The Nordic Cochrane Centre the same year. He became professor of Clinical Research Design and Analysis in 2010 at the University of Copenhagen.
Peter has published more than 50 papers in “the big five” (BMJ, Lancet, JAMA, Ann Intern Med and N Engl J Med) and his scientific works have been cited about 9,000 times. He is author of “Rational Diagnosis and Treatment. Evidence-Based Clinical Decision-Making” (2007) and “Mammography Screening: truth, lies and controversy” (2012).
Peter has an interest in statistics and research methodology. He is a member of several groups publishing guidelines for good reporting of research and has co-authored CONSORT for randomised trials (www.consort-statement.org), STROBE for observational studies (www.strobe-statement.org), and PRISMA for systematic reviews and meta-analyses (www.prisma-statement.org). Peter is an editor in the Cochrane Methodology Review Group.

I found this review of the book by MJ on Amazon:most illuminating”

Quote:” One of the biggest canaries at the moment is Peter Gøtzsche, none other than the head of the Nordic Cochrane Centre, the Scandanavian arm of the Cochrane Collaboration, an independent research and information centre committed to preparing, maintaining, and disseminating reviews of the various treatments of mainstream medicine and examining whether they have adequate evidence of safety and effectiveness. Cochrane was the first group of individuals to champion the notion of`evidence-based’ medicine – that is, medicine shouldn’t be used unless there’s evidence that the stuff works.

Gøtzsche is a guy after my own heart. When asked to speak at a Danish Society for Rheumatology event, called `Collaboration with the drug industry. Is it THAT harmful?’ Peter’s opening gambit was to highlight the fact that Pfizer, one of the meeting’s sponsors, had been fined $2.3 billion in the US for promoting off-label use of four drugs, while Merck, the sponsor the year before, had been responsible for the deaths of thousands due to deceptive information about its arthritis drug.

He even quotes a former vice-president of Pfizer as saying, `It is scary how many similarities there are between his industry and the mob. The mob makes obscene amounts of money, as does this industry. The side effects of organized crime are killings and deaths, and the sides effects are the same in this industry. The mob bribes politicians and others, and so does the drug industry.’

Perhaps even more extraordinary than the careful case made by this blunt soothsayer is the fact that Richard Smith, the former editor of the British Medical Journal, agreed to write the book’s foreword. In the book, Smith points out, the characteristics of organized crime include extortion, fraud, federal drug offenses, bribery, embezzlement, obstruction of justice obstruction of law enforcement, tampering with witnesses and political corruption.

“Peter produces evidence, most of it detailed, to support his case that pharmaceutical companies are guilty of most of these offenses,” says Smith. Indeed, most of the billions paid out as fines by the drugs industry for flouting the law as thought of as `the cost of doing business.’

“As an epidemiologist with very high numerical literacy and a passion for details, so that he is a world leader in critiquing clinical studies, Peter is here on very solid ground,” says Smith. “He shows too how the industry has bought doctors, academics, journals, professional and patient organizations, university departments, journalists, regulators and politicians. These are the methods of the mob.”

This is only the latest canary from among Establishment medicine to blow the whistle on Big Pharma. Marcia Ancell, the editor for two decades at the new England Journal of Medicine, recently published her own book: The Truth About the Drug Companies: How They Deceive Us and What to Do About It.

All of the major medical journals, from the BMJ and the Lancet, to the Journal of the American Medical Association and the New Eng Journal, have revealed the scale of the problem – that correctly prescribed drugs are the fourth leading cause of death, that drug companies massage and make up data.

Medicine should be a gift to us all rather than a money-making scheme for the pharmaceutical industry, as it now largely is.

With that in mind, we suggest that the following be implemented.

An independent funding body should be created to finance all medical trials, whether of drugs, other forms of therapy or alternatives
Doctors should be required to spend one year of their five-year training learning about nutrition, alternative modalities and new possibilities
Drug-company influence should be entirely excluded from medicine, from training colleges and from trips abroad

Doctors should be rewarded for adopting non-drug therapies, thus saving the nation at least one small part of the £160 billion spent every year on drugs by the NHS.
But most of all, we need to open up the entire field of cancer–our understanding of what it is, what causes it and how it could be treated–while taking on board new understandings of the body and the impact upon it of the environment, stress and emotions. As a researcher once commented when asked whether research into alternative healing should continue, “We can’t find the answers if we don’t keep asking the questions.”

We will shortly announce our campaign for freeing medicine from the pharmaceutical industry, so that doctors and patients alike are free to use an entire toolkit of modalities to get and stay well.”   END-QUOTE

Copyright (c) 2013, 2014 Jeffrey Dach MD All Rights Reserved. This article may be reproduced on the internet without permission, provided there is a link to this page and proper credit is given.