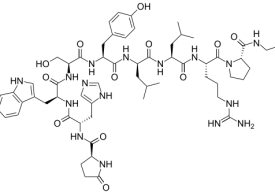 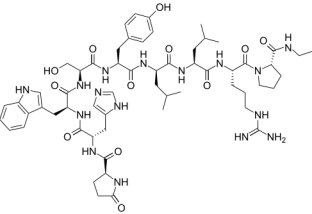 Since the invention of the PSA test for prostate cancer, (prostate specific antigen) , it is quite common to detect elevated PSA in the male population.  Mainstream medical practice for these patients with elevated PSA is to refer them to a urologist for evaluation and possible treatment.  Standard Urological practice is the trans-rectal ultrasound guided biopsy of the prostate.  If prostate cancer is found on the biopsy, then the cancer is characterized according to aggressiveness and invasiveness (Gleason Score).  Above left image: Lupron chemical structure,  a testosterone blocking dug courtesy of wikimedia commons.

For the aggressive or dangerous prostate cancers that do not fit into the watchful waiting category, treatment options include surgery with radical prostatectomy (surgical removal).  The major drawback of surgery is the possibility of post-op urinary and sexual  complications such as urinary incontinence and sexual dysfunction, which might dissuade one from chosing the surgical option.  An alternative to the surgical treatment option is radiation therapy which is administered either with radioactive seeds implanted into the prostate (left  image)  or by external beam radiation of some type.
Abve left image: Radiation Seeds Courtesy of Wikimedia.

For the patients who choose to have radiation therapy, current practice before starting the course of radiation treatments is to “shrink the prostate” with hormonal therapy which suppresses testosterone to low levels.  In the old days of medicine, testosterone blockade was done with surgical castration, and I actually assisted in one of these during my training 30 years ago.  Removing testicles has fallen out of favor, as drugs such a Lupron are available that do the job easily.

Above left image: chemical structure of testosterone courtesy of wikimedia.

A discovery such as this, a Testosterone Blocking drug, which causes a 20 per cent increase in mortality means the treatment is discredited, should be discarded, and should no longer “standard of care”.  Instead this should be considered “substandard care”.  However, old habits in medicine have a way of lingering on, so it may take a few more years for this to change.

Low testosterone in general (independent of underlying prostate cancer issues) is associated with increased mortality.  The recent EPIC study in Circulation 2007 found that,

The study evaluated 786 men who were treated with a short course of neoadjuvant hormone therapy for a median duration of 3.5 months before brachytherapy and 916 men with brachytherapy alone. None of the men received supplemental external beam radiation therapy.

After a median follow-up of 5 years and after adjusting for known prostate cancer prognostic factors and age, the researchers found that neoadjuvant hormone therapy was associated with a hazard ratio of 1.2 for all-cause mortality compared with brachytherapy alone (95% conﬁdence interval, 1.0-1.4; P = .04), Dr. Dosoretz reported.

ABSTRACT   Despite a lack of data, increasing numbers of patients are receiving primary androgen deprivation therapy (PADT) as an alternative to surgery, radiation, or conservative management for the treatment of localized prostate cancer.

Objective  To evaluate the association between PADT and survival in elderly men with localized prostate cancer.

Design, Setting, and Patients  A population-based cohort study of 19 271 men aged 66 years or older receiving Medicare who did not receive definitive local therapy for clinical stage T1-T2 prostate cancer. These patients were diagnosed in 1992-2002 within predefined US geographical areas, with follow-up through December 31, 2006, for all-cause mortality and through December 31, 2004, for prostate cancer–specific mortality. Instrumental variable analysis was used to address potential biases associated with unmeasured confounding variables.

link to this article:
http://jeffreydach.com/2008/10/26/rethinking-testosterone-suppression-for-prostate-cancer-by-jeffrey-dach-md.aspx

(c) 2008-2013 Jeffrey Dach MD All Rights Reserved
This article may be reproduced on the internet without permission,
provided there is a link to this page and proper credit is given.