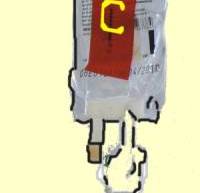 Allan Smith, a New Zealand Dairy farmer, contracted Swine Flu while away on vacation in Fiji.  When he returned home, the flu quickly evolved into severe pneumonia which left him in a coma on Life Support in the Intensive Care Unit.  Chest Xrays showed the lungs were completely filled with fluid with an ”opaque” appearance called “white out”.  After three weeks of this, Allan’s doctors asked the family permission to turn off the machines and let him die.  Allan’s wife Sonia had a brother with some medical knowledge, so he stepped in and said, “you haven’t tried everything, You have got to try high dose IV vitamin C on Allan”.  At first, the doctors resisted, saying it was useless. Next, the three sons weighed in with a persuasive argument to try the IV vitamin C, saying there was nothing to lose….